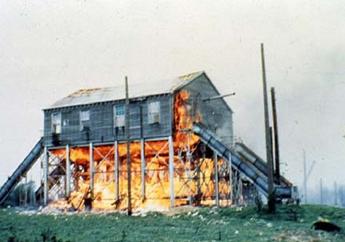 The Weldon Spring Ordnance Works site consists of about 17,232 acres located in St. Charles County, about 30 miles west of St. Louis and 14 miles southwest of the city of St. Charles. From 1941 to 1945, the site produced explosives for the U.S. Armed Services as part of the World War II defense effort. This site was one of the many munitions plants that manufactured trinitrotoluene (TNT) and dinitrotoluene (DNT). Wastes and wastewater from manufacturing operations were discharged onto the soil and drained into the watersheds of both the Mississippi and Missouri Rivers. The Weldon Spring Ordnance Works site was added to the Superfund National Priorities List (NPL) on Feb. 21, 1990.

TNT and DNT remain in the sub-surface soils in a small area of the site and pose a potential direct contact risk. Nitro-aromatic compounds, such as TNT, DNT and others remain in groundwater at concentrations above health-based standards. Groundwater at the site is not currently used for drinking water and groundwater sampling and monitoring is performed to ensure contaminated groundwater is not impacting potential receptors.

Groundwater at the site is currently sampled and monitored to ensure contaminated groundwater is not impacting potential receptors.

Cleanup of soil at the site allows for all reuse except residential. Groundwater consumption will be restricted until the groundwater cleanup is completed.

The Weldon Spring Ordnance Works site is located in St. Charles County, about 30 miles west of St. Louis and about 14 miles southwest of the city of St. Charles. The original site property consisted of 17,232 acres and is bordered by U.S. Interstate 64 to the north and the Missouri River to its south. The U.S. Army acquired the site property in late 1940. From 1941 to 1945, the U.S. Army produced TNT and DNT in support of World War II. The facility included 18 TNT production lines and two DNT production lines.

Soils and pipeline contaminated with explosive materials and breakdown products posed a threat to human health and the environment, particularly groundwater. Numerous past releases of wastes and wastewater from manufacturing operations to the soil and shallow subsurface contaminated groundwater both on and off-site. These wastes also drained into the watersheds of both the Mississippi and Missouri Rivers. Today, DNT, TNT and other nitro-aromatic compounds located in soil and groundwater are the main contaminants of concern at the site. Lead in soil, nitrobenzene in groundwater, polychlorinated biphenyls (PCBs) and polycyclic aromatic hydrocarbons (PAHs) in the soil are other contaminants that affect the site.

Cleanup of the site was conducted under the Comprehensive Environmental Response, Compensation and Liability Act (CERCLA). The Weldon Spring Ordnance Works site was added to the NPL on Feb. 21, 1990. The department, EPA and the U.S. Army entered into a federal facilities agreement Aug. 8, 1991, which defines the regulatory framework between the three agencies. The Army is the lead agency responsible for planning and implementing the response action. EPA and the department provide regulatory oversight of the Army.

Operable Units (OUs) are separate activities undertaken as part of a Superfund site cleanup. The cleanup project was executed in two OUs: the soil and pipeline at the site (OU-1) and the groundwater (OU-2). The Army and EPA signed the record of decision for the selected remedy for OU-1 on Sept. 26, 1996. The selected remedy included excavating and incinerating nitroaromatic-contaminated soils and wooden pipeline and stabilizing lead-contaminated soil. A phased remedial action began in 1998, and included excavating and incinerating affected pipelines, soils and other wastes; treating lead-impacted soils; and restoring the site property. The nitro-aromatic contaminated soils and pipeline incineration was completed in 1999. Construction debris, lead stabilized soils, PAH contaminated soils and soils containing less than 50 parts per million of PCBs were placed in the disposal cell at the nearby Weldon Spring site.

In 2003, an excavation was conducted to a depth of 22 feet below ground surface near a former production building in the center of the Training Area, known as T13. Confirmation samples collected at the bottom of the  excavation and along the sidewalls showed nitro-aromatic contamination in the soil exceeded remediation goals. In 2004, the U.S Army Corps of Engineers produced an explanation of significant differences report, which modified the selected remedy and documented an increase in soil amounts. This caused an increase in both remediation time and cost. Additional materials were incinerated and placed in the Weldon Spring disposal cell. The amount of materials disposed off-site was more than anticipated at the time of remedy selection.

On Sept. 30, 2004, the U.S. Army, U.S Army Corps of Engineers, EPA and the department signed the record of decision for the selected remedy for OU-2. The selected remedy includes monitored natural attenuation with institutional controls. Natural attenuation involves a variety of physical, chemical or biological in-place processes that, under favorable conditions, act without human intervention to reduce the mass, toxicity, mobility, volume or concentration of contaminants in groundwater. The Army implemented the monitoring part of the remedy, but the institutional controls for the site have not been fully implemented.