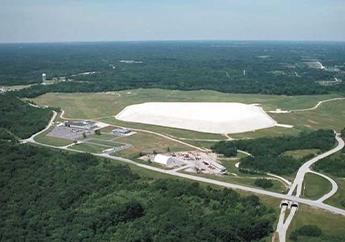 The Weldon Spring Site is now under long-term monitoring and maintenance provided by DOE. Missouri Department of Natural Resources staff provide technical oversight for site activities performed by DOE. These activities include regular inspections, environmental monitoring, sampling and other site operations and activities.

DOE's Weldon Spring Site Remedial Action Project, now known as the Weldon Spring Site, consisted of two distinct locations, the chemical plant area and the quarry. The chemical plant was located on State Route 94, approximately two miles southwest of U.S. Route 40/61. This 217-acre site was the former location of a uranium feed materials plant, raffinate pit storage areas and explosives production. The quarry was located approximately four miles southwest of the chemical plant. The nine-acre limestone quarry was once used as a limestone gravel supply for operations at the site. Previous operations at the site resulted in chemical and radiological contaminants in soil and groundwater at the site.

Active remediation, or cleanup, of the Weldon Spring Site was conducted under CERCLA and as part of DOE’s Environmental Restoration and Waste Management Program. Cleanup of the quarry included bulk waste removal, residual waste removal and land use controls restricting use of groundwater in the area and limiting use of the quarry to recreational purposes. The chemical plant area cleanup consisted of demolishing buildings, raffinate pit cleanup, placing waste into a 41-acre on-site engineered disposal cell and site restoration. One hundred and seventy acres of restored prairie land surrounds the disposal cell. A department ecologist conducted vegetation sampling and analysis to verify the success of the prairie restoration.

Active cleanup at the site is complete. Areas that still have contamination, such as the groundwater, are being monitored as part of the selected remedy for the site. The quarry continues to be monitored to ensure protection of human health and the environment. The department received the five-year review report in spring 2021, which determines the protectiveness of the entire site remedy for the long-term. The department reviewed and commented on the report. A final document is expected in September 2021.

Construction continues on the new Weldon Spring Site Interpretive Center and administrative office space. The new facility will have updated exhibits, an auditorium and four student classrooms for educational purposes.

From 1941 to 1945, as part of the World War II defense effort, the U.S. Army produced explosives at the Weldon Spring Ordnance Works, a separate facility located near Weldon Spring, not far from St. Louis. In 1955, the Army transferred 217 acres to the Atomic Energy Commission (AEC) for constructing the Weldon Spring Uranium Feed Materials Plant. The plant was located on State Route 94, approximately two miles southwest of U.S. Route 40/61. From 1957 to 1966, the feed materials plant tested and then processed some of the uranium ore concentrates and a small amount of thorium. The uranium ore refining process created sludge (raffinate), which was stored in four large, clay-lined, open-air lagoons called raffinate pits.

In 1958, the AEC acquired the title to the Weldon Spring Quarry from the Army. The quarry was located about four miles southwest of the feed materials plant. The Army used this nine-acre limestone quarry to extract limestone aggregate as a limestone gravel for use in constructing the Weldon Spring Ordnance Works. Later, the Army used the quarry pit to burn wastes from its explosives manufacturing operations and for disposing other wastes, including rubble contaminated with trinitrotoluene (TNT). From 1963 to 1969, the AEC disposed of uranium and thorium residues in the quarry. Material placed in the quarry during this time included building rubble containing uranium and radium, and soils from demolishing a uranium ore processing facility in St. Louis. Other radioactive materials in the quarry included drummed wastes, uncontained wastes and contaminated pieces of manufacturing equipment.

In 1967, the AEC returned the site to the Army for use as an herbicide production plant, otherwise known as the Weldon Spring Chemical Plant. In 1968, the Army started removing equipment and decontaminating several buildings; however, the herbicide project was canceled in 1969 before any process equipment was installed. The Army retained responsibility for the land and facilities of the chemical plant; the raffinate pits were transferred back to the AEC. The AEC was abolished in 1974. The Weldon Spring Site was placed in caretaker status, meaning no production or activity took place from 1981 through 1985, when custody was transferred from the Army to DOE. Surrounding properties that were historically part of this site have since been transferred to other owners, such as:

In 1985, DOE proposed designating control and decontaminating the chemical plant, raffinate pits and quarry as a major project, originally known as the Weldon Spring Site Remedial Action Project. Cleanup of the site was conducted under the Comprehensive Environmental Response, Compensation and Liability Act (CERCLA) and as part of DOE’s Environmental Restoration and Waste Management Program. This project was executed in two distinct locations, the Chemical Plant area and the Quarry. The quarry was placed on the Superfund National Priorities List (NPL) in July 1987. The chemical plant and raffinate pits were added to the NPL in March 1989.

A major component of the remediation process at this site is the waste disposal cell. The disposal cell is a 45-acre area with layers of clay and plastic lining used to contain the waste placed inside it. From 1993 to 1995, bulk waste was removed from the quarry under the quarry bulk waste record of decision. The bulk material was transferred from the quarry to the disposal cell via a haul road that was constructed along an old rail-spur to prevent the material from being transported down public roads. Contaminated materials from the Site Water Treatment Plant, along with sludge from the bottom of the raffinate pits, were solidified into a cement-like grout in the Chemical Stabilization and Solidification Plant. The grout was then pumped to the disposal cell. Wastes from the chemical plant, as well as the chemical plant building demolition debris, were also placed in the disposal cell. The disposal cell was capped and construction was complete Oct. 23, 2001, with a finished height of 75 feet. A viewing platform was built on top of the disposal cell, which offers a panoramic view of St. Charles County and the surrounding Howell Prairie. 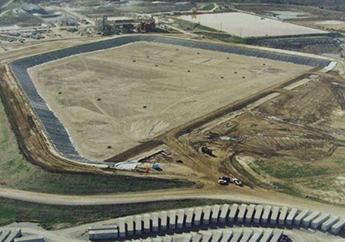 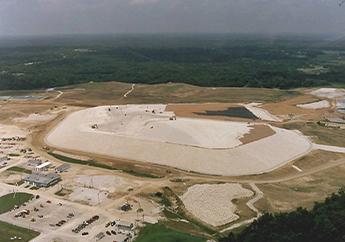 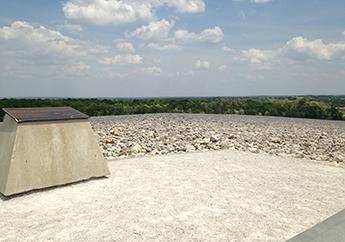 Remediation of soils and contaminated debris is complete. Waste management and groundwater monitoring continues at the site under long-term stewardship. Any water or condensation that remains inside the disposal cell is captured in a leachate collection system at the bottom of the cell. The water is then treated before being transported to the wastewater treatment plant. The Groundwater OU focuses on current groundwater remediation efforts at the Chemical Plant site. The Quarry Residual OU focuses on monitoring the groundwater to confirm the success of waste removal at the quarry. The Groundwater OU and the Quarry Residual OU are currently in a long-term monitoring phase to support the chosen remedy of monitored natural attenuation of contamination in the groundwater. Natural attenuation involves a variety of physical, chemical or biological in-place processes that, under favorable conditions, act without human intervention to reduce the mass, toxicity, mobility, volume or concentration of contaminants in groundwater.

The department expects to receive a sixth five-year review report sometime in March or April 2021. The review will evaluate the continuing effectiveness of the remedy at the site. The 2016 five-year review found the remedy for the entire site to be protective of human health and the environment at that time. However, due to issues with the groundwater remedy, EPA required additional sampling locations be added to the sampling and monitoring program. The next five-year review will determine the protectiveness of the entire site remedy for the long-term. The department received the five-year review report in spring 2021 and reviewed and commented on the report. A final document is expected in September 2021.

The DOE maintains engineered and institutional controls at the Weldon Spring Site that protect human health and the environment. These controls include a combination of activities, such as surveillance activities, record-keeping activities, inspections, groundwater monitoring, cap repair, building maintenance, barriers and contained structures, access control and posting signs. The department provides oversight of these activities to make sure the site remains in regulatory compliance.