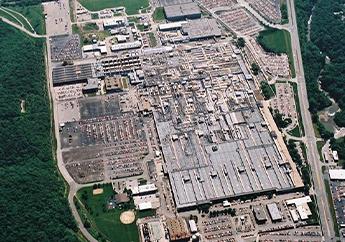 The former Bannister Federal Complex is located at 1500-2000 E. Bannister Road, 10 miles south of downtown Kansas City, Missouri. From 1942 until November 2017, the property was a federal government-owned, contractor-operated federal installation. This approximately 309-acre site was constructed in 1942 to manufacture airplane engines for the U.S. Navy. Beginning in 1949, the U.S. Department of Energy (DOE)/ National Nuclear Security Administration (NNSA) began new manufacturing operations, including manufacturing non-nuclear components for nuclear weapons. The portion of the facility owned by DOE/NNSA, the Kansas City Plant, was operated by Bendix Corp. Ownership of the remaining portions of the complex was transferred to the U.S. General Services Administration (GSA), who operated a warehouse in the western part of the building since the early 1960’s. Railroad tracks run north to south through the property.

In 2013, DOE/NNSA moved their operations to new facilities. In 2014, GSA moved their various operations to new locations. In 2017, Bannister Transformation & Development LLC (BT&D) took ownership of approximately 225-acre areas of the site west of the railroad tracks, plus two acres off-site of the main complex, through an early transfer. BT&D is in the process of redeveloping the property. GSA owns the remaining 82 acres of the former federal complex east of the railroad tracks, which includes a closed U.S. Department of Defense (DOD) landfill. GSA leases the facility on its property to the U.S. Marine Corps under a long-term lease.

The department’s Waste Management Program, Engineering Section and the department's Environmental Remediation Program, Federal Facilities Section work together to coordinate review and oversight of remedial activities at this site. Federal Facilities staff are on-site to oversee field and sampling activities, perform site inspections and respond to public concerns and questions as needed. Staff have been and will remain at the site throughout the project duration. Demolition and cleanup work are complete and regrading is expected to be complete summer 2021. Both the BT&D-owned property and GSA-owned property are regulated under Missouri’s Resource Conservation and Recovery Act (RCRA)-equivalent hazardous waste program, with the Engineering Section providing regulatory oversight. For more information about that portion of the site, visit the department's Bannister Complex webpage.

The U.S. Army Corps of Engineers (USACE) is performing the environmental investigation and cleanup of the closed landfill on the GSA-owned property under the Formerly Used Defense Sites (FUDS) program, with the Federal Facilities Section providing regulatory oversight. Information about that portion of the site is available below.

Following the Governor’s approval of an early transfer request, DOE/NNSA transferred the property west of the railroad tracks to BT&D on Nov. 15, 2017. For more information about the investigation, demolition, cleanup and redevelopment of that part of the property, visit the department's Bannister Complex webpage.

The USACE, on behalf of GSA, conducted a remedial investigation of the closed landfill and completed an investigation report in October 2016.

What’s Left to Do

For information about the remaining portions of the property, visit the department's Bannister Complex webpage.

The approximately 309-acre site is bordered by Troost Ave. to the west, a wooded bluff and Legacy Park to the north, Blue River to the east and Indian Creek and Bannister Road to the south. From 1942 until November 2017, the Bannister Federal Complex was a federal government-owned, contractor-operated federal installation. From 1942 to 1963, the complex was owned by the Defense Plant Corp., Reconstruction Finance Corp. and the U.S. Department of Navy. The U.S. Navy built the main manufacturing building in 1942. Pratt and Whitney Corp. used the main manufacturing building from 1943 to 1945 to build aircraft engines for the Navy in support of World War II. From 1948 until 1961, Westinghouse Electric Co. built jet engines in the main manufacturing building for the U.S. Navy in support of the Korean Conflict. In 1949, Bendix Corp. subleased part of the building to manufacture non-nuclear components of nuclear weapons for the Atomic Energy Commission (AEC). Bendix merged with Allied Corp., who merged with Signal Corp. and became Allied Signal Inc., who acquired Honeywell Federal Manufacturing & Technologies LLC, the last operator of what was formerly known as the Kansas City Plant. The AEC was abolished in 1974. In 1975, the Energy Research and Development Administration was created and took custody of the Kansas City Plant until it became part of DOE, which was created in 1977.

From 1942 to1964, government contractors operated a 40-acre DOD landfill, located in the southeast portion of the complex, as a disposal site for the entire complex. Building tenants used the landfill to dispose of solid waste, such as construction debris, floor sweepings, wastebasket contents and possibly industrial wastes. Historic information indicates the general public may have used the landfill for disposal during its early years of operation.

In 2013, DOE/NNSA moved their operations to new facilities. In 2014, GSA moved their various operations to new locations. Anyone leasing buildings on the portion of the federal complex west of the railroad tracks, relocated by December 2015. In 2017, after completing the early transfer process, BT&D took ownership of approximately 225-acre areas of the site west of the railroad tracks, plus two acres off-site of the main complex. For more information about the early transfer process, please review the Early Transfer Process tab above. BT&D is currently in the process of redeveloping their portion of the site. GSA owns the remaining 82 acres of the former federal complex east of the railroad tracks, which includes the closed landfill. GSA is leasing this property to the U.S. Marine Corps under a long-term lease.

Various manufacturing operations at the site resulted in hazardous materials  being stored, used and transferred at the site. DOE/NNSA also used depleted uranium and metallic uranium in manufacturing processes at the Bannister Federal Complex. During that time, on-site releases of hazardous materials resulted in contaminated soil and groundwater. Releases from an underground tank farm, a trichloroethylene reclamation facility, a plating building and various industrial practices performed throughout the site resulted in large contaminant plumes in the soil and groundwater. The contaminant plumes contain solvents, polychlorinated biphenyls (PCBs) and petroleum products. Additionally, building materials containing asbestos, PCBs and paint containing heavy metals were located throughout the facility buildings. Volatiles have been confirmed in the groundwater at the landfill.

What’s Left to Do

For information about the remaining portions of the property regulated under the hazardous waste permits, visit the department's Bannister Complex webpage.

Through the early transfer process, federal property can be transferred to private ownership before all environmental remedial action is complete. Early transfer is a process involving a number of required steps that ultimately requires the state's governor's approval and ends when the site is cleaned up to the agreed upon level. DOE/NNSA determined an early transfer, with clean-up responsibilities being transferred to the new owner, would be the best way to address the portion of the federal complex west of the railroad tracks.

DOE/NNSA began the early transfer process by submitting a Letter of Intent to the Missouri governor on Feb. 26, 2015. CenterPoint Properties (now BT&D) was chosen as the preferred developer for the site. A report to congress specified $22 million for BT&D to perform the investigation that was published in the Due Diligence Summary Reports and complete the demolition and remediation plans.

The most important submittal in the early transfer process is the Covenant Deferral Request. The Covenant Deferral Request package includes a Finding of Suitability for Early Transfer, which includes a description of the site’s status and an overview of the known contamination. The site status is further explained in the Description of Current Conditions Report. A brief description of the activities that will be performed following the site transfer, including the demolition, remediation and changes to the geography of the site, is expanded on in the Corrective Measures Report, Master Demolition Plan, Bannister Federal Complex Abatement and Demolition Plan Supplements and Site Civil. A plan for the intended future use of the site is provided in the Covenant Deferral Request (CDR) package as well. DOE/NNSA submitted the CDR package to the Missouri governor in September 2017, which the governor approved Oct. 16, 2017.

Following the governor's approval of the early transfer request, DOE/NNSA transferred the property west of the railroad tracks to BT&D on Nov. 15, 2017. BT&D has assumed responsibility for completing corrective action and site remediation on their portion of the site. This work will be completed with oversight by the department and DOE/NNSA. The BT&D-owned and GSA-owned properties are regulated under Missouri’s RCRA-equivalent hazardous waste program, with the department's Waste Management Program, Engineering Section providing regulatory oversight. BT&D and GSA are the current “permittees” under the hazardous waste permits. For more information, visit the department's Bannister Complex webpage.