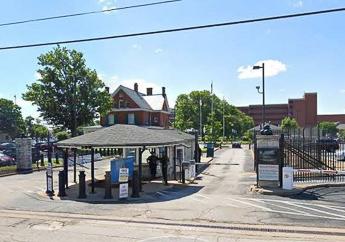 The SS-018 site is located at the National Geospatial-Intelligence Agency (NGA) west campus at 3200 S. Second St. in St. Louis. The NGA campus is part of an original 37-acre property, established in 1827 for the U.S. Cavalry and militia. Known as the St. Louis Arsenal, the site was an ordnance depot and staging area for recruiting. The St Louis Arsenal played a key role in American history, from Westward Expansion, to the Civil War, continuing through World War I and II.

The site cleanup is now managed by Scott Air Force Base and NGA uses the facility as its western base of operations. Since 1952, the site has produced cartographic and imagery products and provided imagery intelligence information and geo-spatial information in support of national security objectives. The site currently is approximately 22 acres and consists of 15 buildings, paved parking areas, roads and walkways.

Scott Air Force Base is conducting ongoing environmental site investigations and remediation at the site to address past releases of contaminants. The U.S. Air Force (USAF) is the lead federal agency for the site. The Missouri Department of Natural Resources provides regulatory oversight of cleanup activities.

Based on site activities conducted before 1950, hazardous waste generation was likely relatively minor. No records of hazardous waste or substance use, storage or generation at the site exists before 1980. Based on the available information about chemicals and wastes formerly stored on-site, hazardous substances have been present at the site. These substances include photo processing chemicals, solvents and degreasers, paints, thinners, water treatment chemicals, industrial strength cleaners, compressed gases, inks, toners, pesticides, petroleum products, heating oil and fuels, automotive wastes and materials, incineration wastes and asbestos materials.

Contaminants of concern detected in soil at the site include volatile organic compounds, polyaromatic hydrocarbons, pesticides, dioxins and inorganics, such as chromium and lead.

Soil and groundwater investigation and sampling have been conducted at this NGA site span for more than 40 years. This work eventually resulted in being able to select a final cleanup plan, which was made available for public review and comment. Following the comment period and a public meeting, the USAF issued a final record of decision (ROD) that described the cleanup alternative and selected final remedy. The department accepted the ROD in September 2019.

According to the city of St. Louis Zoning Department and Assessor’s Office, the site is zoned for commercial use. The reasonably anticipated future land use of the site is commercial/ industrial.

The SS-018 site is located at the NGA west campus at 3200 S. Second St. in St. Louis, next to the Anheuser-Busch Brewery. In 1827, the U.S. government acquired the property, which was originally 37 acres, to replace the crumbling Fort Belle Fontaine. Originally known as the St. Louis Arsenal, the property was used to serve the U.S. Cavalry as a recruiting station and ordnance depot. It also served the regular Army and militias west of the Mississippi River.

Small arms manufacturing and repair work began at the site in 1828. The Arsenal provided materiel for the 1832 Black Hawk War and supplies for the 1836 Second Seminole War. During the 1840’s, the Arsenal produced ammunition and weapons to support the Mexican-American War efforts and Fremont’s 1843 expedition to the Pacific Ocean. In the 1850’s, pioneers heading west stocked up on weapons and ammunition at the Arsenal. The 1860’s saw divided states and eventually, the Civil War. Missouri was a border state; for a time the U.S. Army, Missouri citizens, the North and the South fought for control of the Arsenal and the munitions it could supply for their cause. In spite of the many attempts on the St. Louis Arsenal, the Union managed to keep control of it throughout the Civil War.

During the next decades, the Army continued various operations at the Arsenal. In 1952, the property transferred to the USAF. After the change of ownership, the Aeronautical Chart Service took up residency at the Arsenal. As needs changed, so did the name. The Aeronautical Chart Service became the Aeronautical Chart and Information Center, then the Defense Mapping Agency in 1972, and the National Imaging and Mapping Agency in 1996 (NIMA). NIMA became the National Geospatial-Intelligence Agency (NGA) in 2003. Since 1952, the facility has been used for producing cartographic and imagery products and for providing imagery intelligence and geo-spatial information in support of national security objectives. The current 24-acre SS-018 site is owned by Scott Air Force Base and operated by NGA.

Based on activities conducted before 1950, hazardous waste generation was most likely minor. Based on the site use after 1950, hazardous substances that may have been present at the site include photo processing chemicals such as silver and chromium, trichloroethylene (also referred to as trichloroethene or TCE), solvents, paints, thinners, water treatment chemicals, industrial strength cleaners, compressed gasses, inks, toners, pesticides, petroleum products, heating oil and fuels, automotive wastes and materials, incineration wastes and asbestos materials.

Due to past activities at the site, environmental investigations were conducted to investigate potential soil and groundwater contamination. The site investigation boundary consists of 22 of the sites’ 24 acres. Many soil and groundwater investigation and sampling events have been conducted at site SS-018 for more than 40 years. Investigation results revealed volatile organic compounds in subsurface soil, polyaromatic hydrocarbons (PAHs) mainly in shallow soil samples, pesticides in soil, dioxins in surface and subsurface soil and inorganics in soil, such as arsenic, chromium, lead, manganese and thallium. The amounts found and historical site use support the likelihood that the arsenic, manganese and thallium are naturally occurring and are not related to specific releases of hazardous substances, pollutants or contaminants at the site.

As the lead cleanup agency for the site, the USAF has conducted environmental restoration activities, with the Missouri Department of Natural Resources providing regulatory oversight. The proposed plan for the preferred remedy for the site was released for public review and comment in November 2018. Following the opportunity for public review and comment and a public meeting, the USAF responded to all written and verbal comments and concerns. After considering the pubic comments and alternatives presented in the proposed plan, the USAF selected Alternative 3, Excavation and Off-site Disposal with Institutional Controls, as their preferred alternative. The USAF submitted a final record of decision (ROD) to the department, which the department accepted in September 2019.

The selected remedy, Alternative 3, removes “hot spots,” prevents unacceptable human health risk and maintains industrial land use. Compared to other alternatives, this remedy provides protectiveness at a substantially reduced cost, involves less disturbance to the facility and is more readily implementable than other alternatives. This alternative also provides greater overall protection of human health and the environment as well as long-term permanence and state acceptance. The selected remedy outcome will allow for the continued and reasonably anticipated future commercial/ industrial land use at the property while being protective of human health and the environment.

The selected remedy is protective of human health and the environment, complies with federal and state requirements that are applicable or relevant and appropriate to the remedial action, is cost-effective and uses permanent solutions and alternative treatment technologies to the maximum extent practicable.Because this remedy will result in hazardous substances, pollutants or contaminants remaining on-site above levels that allow for unlimited use and unrestricted exposure, a statutory review will be conducted within five years after implementing the remedial action to ensure the remedy is, or will be, protective of human health and the environment.

Plans are currently underway to relocate the NGA west campus to the North St. Louis Brownfields cleanup site sometime in 2023. According to the city of St. Louis Zoning Department and Assessor’s Office, the current SS-018 site is zoned commercial. The reasonably anticipated future land use of the site is commercial/ industrial.