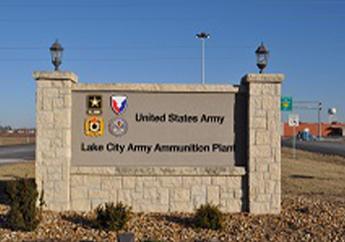 The Lake City Army Ammunition Plant (Lake City AAP) is located on 3,935 acres at the intersection of Highways 7 and 78 in Independence, in eastern Jackson County. In 1941, the Remington Arms Co. established the plant to manufacture and test small caliber ammunition for the U.S. Army. Lake City AAP is the largest small arms (5.56 - 20 mm) manufacturing plant in the world. With the exception of the five-year period between the end of World War II and the beginning of the conflict in Korea, this government-owned, contractor-operated facility has been in continuous production since October 1941.

The department's Federal Facilities Section, together with the U.S. Environmental Protection Agency (EPA), provides oversight for the environmental investigation and cleanup of this site.

The Lake City AAP site is located on 3,935 acres at the intersection of Highways 7 and 78, between Independence and Blue Springs, in eastern Jackson County. In 1941, the Remington Arms Co. established the plant to manufacture and test small caliber ammunition for the U.S. Army. Lake City AAP is the largest small arms (5.56 - 20 mm) manufacturing plant in the world. With the exception of the five-year period between the end of World War II and the beginning of the conflict with Korea, this government-owned, contractor-operated facility has been in continuous production since October 1941. Lake City AAP continues to produce munitions for the nation’s military services today.

During the cleanup process, a site can be divided into a number of distinct areas depending on its complexity. These areas, called operable units (OUs), may address geographic areas, specific problems, or areas where a specific action is required. Five OUs were originally established at Lake City AAP for environmental cleanup. OU-5 was later incorporated into OU-1 and is no longer a separate OU. OUs 1, 2 and 3 are in the long-term remedy stage. Every five years, the remedies are evaluated to confirm the remedies put in place protect public health and the environment and function as intended. Some OUs include institutional controls as part of the long-term remedy. The following actions have been implemented at the site to ensure protectiveness of human health and the environment:

Long-term remedies are being implemented, including institutional controls to prohibit non-industrial land uses, monitored natural attenuation and long-term monitoring, groundwater extraction and air stripping, and in-place treatment. Natural attenuation involves a variety of physical, chemical or biological in-place processes that, under favorable conditions, act without human intervention to reduce the mass, toxicity, mobility, volume or concentration of contaminants in groundwater. Several five-year reviews of the site’s remedies have been conducted. The most recent review concluded that the selected remedy continues to be protective of human health and the environment in the short-term. Continued protectiveness of the environment requires maintenance of vegetative covers.

Area 10 includes three acres within an active firing range in the east-central part of Lake City AAP; the U.S. Army has no plans to stop firing operations. Historically, this area was used to dispose waste material from firing ranges, including depleted uranium rounds from the Area 27 bullet catchers. Contaminated sand piles were removed from Area 10 (former radioactive munitions waste disposal area) in 2008. The Army declared a “no further action” remedy for the area in 2009. The selected remedy for Area 10 is protective of human health and the environment.

The Army will continue to operate site remedies, maintain institutional controls and monitor the groundwater.

The fourth five-year review was completed on Sept. 4, 2020. The purpose of five-year reviews is to evaluate site remedies to determine the protectiveness of the entire site remedy for the long-term. Five-year reviews are required for any remedy that results in any hazardous substance, pollutant, or contaminant remaining at the site above levels that allow for unlimited use and unrestricted exposure. The 2020 five-year review identified several remedy issues, which the U.S. Army is addressing.

On Jan. 15, 2013, the charter for the Restoration Advisory Board (RAB) was signed. The RAB has been the main method of public participation at Lake City AAP. The RAB meets twice a year to discuss ongoing environmental cleanup at the site. In addition to community members, the RAB includes representatives from the U.S. Army, U.S. Environmental Protection Agency and the department. The RAB is the place where information is exchanged between the community and agency members. RAB meetings are open to the public and are held at Lake City AAP or the Mid-Continent Library's North Independence Branch. The library also houses the administrative record, which contains the community involvement plan for the site.

As the only major small arms manufacturing facility for the U.S. Army, there is no plan to alter the Lake City AAP's critical mission. Future land use will remain industrial at each of the OUs. It is unlikely that Lake City AAP will be used for anything other than industrial and non-residential purposes. Land-use restrictions were implemented by the Army, with the intent of retaining control of the land for manufacturing and other industrial or commercial purposes.