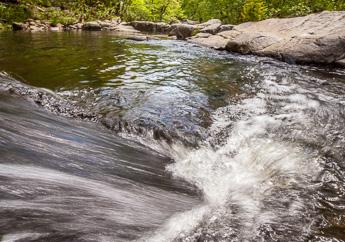 Missouri's plentiful streams, rivers, lakes and wetlands are critically important natural resources. The department is responsible for protecting and improving water quality and ensuring compliance with the federal Clean Water Act by implementing the Missouri Clean Water Law. To be able to prevent and address problems in our streams, rivers, lakes and wetlands, the department needs good information about the status of our water resources, potential and actual threats, options for addressing the threats, and data on how effective management actions have been. The department's water quality monitoring efforts are focused on providing that critical information.

These bodies of flowing water move in one direction. Streams and rivers can be found everywhere. They start at headwaters, such as springs, snowmelt or even lakes, and then travel all the way to their mouths, usually another water channel or the ocean. The characteristics of a river or stream change during the journey from the source to the mouth. The temperature is cooler at the source than it is at the mouth. The water is also clearer, has higher oxygen levels and freshwater fish such as trout and heterotrophs can be found there. Toward the middle part of the stream/river, the width increases, as does species diversity. Numerous aquatic green plants and algae can be found here. Toward the mouth of the river/stream, the water becomes murky from all the sediments it picked up upstream, decreasing the amount of light that can penetrate the water. Since there is less light, there is less diversity of flora, and because of the lower oxygen levels, fish that require less oxygen, such as catfish and carp, can be found.

Lakes are formed by different acts of nature. Many appeared after glaciers during the Pleistocene glaciation, between 12,000 and 1.8 million years ago, and left giant bowl-shaped hollows in the land that filled with rainwater and runoff. Others were created when Earth’s crust shifted, leaving grooves and ridges to catch water. Lakes vary in size and are scattered throughout the land. Many ponds are seasonal, lasting just a couple of months (such as sessile pools) while lakes may exist for hundreds of years or more. Ponds and lakes may have limited species diversity since they are often isolated from one another and from other water sources like rivers and oceans.

Wetlands are areas of standing water that support aquatic plants. Marshes, swamps and bogs are all considered wetlands. Plant species adapted to the very moist and humid conditions include pond lilies, cattails, sedges, tamarack and black spruce. Marsh flora include cypress and gum. Wetlands have the highest species diversity of all ecosystems. Many species of amphibians, reptiles, birds (such as ducks and waders) and furbearers can be found in the wetlands. Wetlands are not considered freshwater ecosystems as there are some, such as salt marshes, that have high salt concentrations. These support different species of animals, such as shrimp and shellfish, as well as various grasses.