For Missouri, groundwater is a vast resource whose importance cannot be overstressed. There are more than a dozen major aquifers in the state that range from shallow, localized, unconsolidated sand and gravel deposits underlying river valleys to deep sedimentary rock units that cover large parts of the state. Missouri’s aquifers are estimated to contain as much as 500 trillion gallons of potable groundwater that needs little or no treatment before it is safe for use. 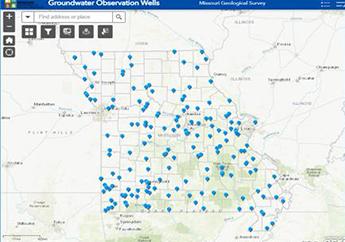 More than 80% of Missouri’s public water supplies use groundwater. It supplies nearly all of the rural residents who use individual private water supplies. There are hundreds of thousands of wells in use across the state and about 3,000 new water wells drilled each year. Total groundwater use in Missouri easily exceeds 350 billion gallons of water per year.

Although groundwater is considered an abundant natural resource in Missouri, it is certainly not considered an endless natural resource. Prior to mankind having developed the ability to extract groundwater from aquifers through wells, groundwater flow systems were probably under steady state conditions. The amount of water that naturally flowed from aquifers into rivers and streams was offset by recharge. This began to change with the development of well drilling machines. Today, water wells extract large volumes of water from Missouri’s aquifers. In some cases the amount of water withdrawn from an aquifer in a particular area is less than the average recharge so there is no long-term net water level change. However, in other areas the amount of water being produced exceeds recharge, resulting in water-level decline.

The department has been monitoring groundwater levels throughout Missouri since the mid-1950s. Operated by the department's Water Resources Center, the network consists of over 150 wells that vary from less than 30 feet deep to more than 1,800 feet deep. They monitor aquifers ranging from shallow, unconfined alluvial and glacial drift aquifers to deep confined bedrock aquifers. Some of these were constructed by the department specifically for measuring groundwater levels. Most, however, began as water supply wells whose use was later discontinued. They subsequently were loaned or donated to the department by cities, rural water districts, businesses or private individuals who no longer needed them for supplying water.

Groundwater observation wells serve much the same purpose as the oil-level dipstick on an automobile engine. If a car lacked a device to monitor engine oil, then the first sign of problem might be the sounds of an expensive engine being rapidly destroyed by the lack of a vital fluid, oil. For the thousands of wells that produce from Missouri’s aquifers the vital fluid is water. The observation well network helps serve as an early warning system that can identify where groundwater use is occurring at a rate that the aquifer cannot sustain indefinitely.

Of course, not all changes are due to ground-water use. Many groundwater-level fluctuations are caused by natural factors. The addition of water to an aquifer by recharge from precipitation will cause water level to rise closer to land surface in shallow, unconfined aquifers. During extended droughts, water levels drop even in relatively unused aquifers as water continuous to discharge from the aquifer into streams or other aquifers. Some aquifers show water level changes that are caused by tidal effects (the position of the Sun and Moon relative to Earth). Water levels in artesian or confined aquifers will change due to barometric pressure fluctuations. Trains or heavy trucks can locally cause shallow groundwater levels to change briefly. Earthquakes, even those on the other side of the world, can cause groundwater levels to fluctuate.

In 2020, the department began installing probes at stations that measure soil moisture. Soil moisture plays an important role in drought and flood forecasting, agricultural needs, water supply concerns, forest fire prediction, and other natural resource activities. The first phase includes stations located in or near the following towns: Hermann, Jackson, Lebanon, Mt. Leonard, Naylor, Steele, St. Joseph and Tarkio. These stations measure soil moisture. Some also measure soil temperature. Data is collected every 30 minutes and is transmitted along with groundwater information every hour. The first phase of the project also includes the installation of probes in or near the towns of Atherton, Columbia Bottoms, Indian Hills, Neosho, Ozark and Warsaw.