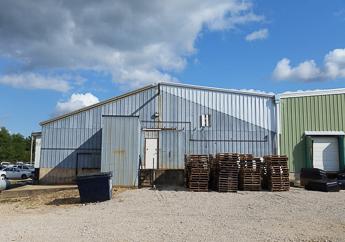 In 2017, the department became aware of allegations by former Dawson employees that waste trichloroethylene (TCE), also referred to as trichloroethene, was disposed out the back loading dock door onto the ground for approximately one year at the Dawson Metal Products Camdenton Facility #2. TCE, a volatile organic compound (VOC), was used in the degreasing operations. From 2017 to 2019, the department performed an investigation at the site. TCE was detected in soil, sub-slab vapor and indoor air at the facility. United Technologies Corp. (UTC), the successor to Dawson Metal Products and responsible party, completed design work and installation of a vapor mitigation system beneath the facility building. In 2018, UTC installed a sub-slab depressurization system at the site to address vapor intrusion risks.

Based on current information, there is no evidence of TCE exposure to Dawson Metal Products Facility #2 building employees above health-based action levels. Ratheon Technologies, who merged with UTC, is conducting additional site characterization activities to further define the extent of TCE contamination from past disposal practices. The property is currently owned by Dickerson Building LLC and occupied by Laker Co.

In August 2017, the department interviewed former employees and conducted a site visit. Following the Superfund site investigation process, the department completed a pre-CERCLA site screening and an abbreviated preliminary assessment, documenting the potential release of TCE into the environment. The Pre-CERCLA Site Screening and Abbreviated Preliminary Assessment reports recommended the site enter into the U.S. Environmental Protection Agency's active sites inventory, and additional investigation be performed.

In 2019, a site inspection was completed, documenting the release of TCE into the environment. Drinking water, soil, sub-slab vapor, indoor and ambient air were assessed during the site inspection. The department collected samples from 17 private drinking water wells, one public drinking water well (Blair Heights Well) and two springs within 1 mile of the site. All samples were analyzed for VOCs, including TCE. No VOCs were detected in any water samples. The department collected a total of 14 sub-slab vapor, 13 indoor air and two ambient outdoor air samples. TCE was not detected in the outdoor air. TCE was detected in five sub-slab vapor samples and eight indoor air samples. The TCE concentrations in sub-slab vapor in one area of the building, closest to the loading dock, were elevated above sub-slab action levels. This data, along with TCE detection in the indoor air, indicates that some vapor intrusion is occurring in the building in Rooms 1, 2 and 3 near the loading dock. In the loading dock area on the northeast portion of the facility, the department collected a total of 23 soil samples from nine borings at depths ranging from zero to 17 feet. TCE was detected in 14 soil samples. The Site Inspection Report recommends additional site characterization to fully define the areas of TCE contamination.

In 2018, UTC conducted design work and pilot tested a sub-slab vapor mitigation system. The system installed consists of three independent blower motors that create negative pressure in the subsurface of Room 1 of the facility. Indoor air sampling was conducted after installation of the system. Results from this sampling showed no detections of TCE in the facility. In February 2020, UTC conducted additional confirmatory indoor air sampling with department oversight. During this sampling event, the system was inspected and found to be in satisfactory condition. The sample results confirm that indoor air at the facility remains below levels of health concern. The sub-slab depressurization system is operating properly and vapor intrusion is not taking place. Continued operation and maintenance of the system is required.

Ratheon prepared an operation and maintenance plan for the sub-slab depressurization system, which the department is currently reviewing.

In June 2020, Ratheon Technologies conducted additional soil sampling according to the January 2020 approved Supplemental Soil Investigation Work Plan. The goal of the work was to fully define the areas of TCE contamination. Data from the site characterization will be used to determine if any cleanup activities need to be performed at the site. The department will review Ratheon’s soil investigation report when submitted and determine the next steps.