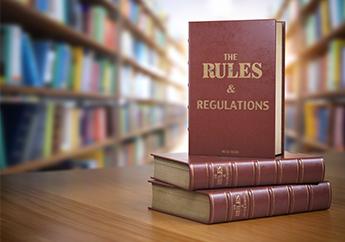 If improperly managed, both hazardous and non-hazardous waste can adversely affect Missouri's air, land and water and the people, plants and animals that rely on these resources. The department works with businesses; local, state and federal governments and the public to protect human health and the environment from improperly handled waste. One of the main ways we do this is through implementing and enforcing state regulations. Below is a broad overview of the different authorities that provide the foundation of support for implementing waste-related environmental rules and regulations. For information about other federal and state environmental laws and regulations, visit Laws, Rules and Regulations.

Missouri's environmental laws and regulations relating to waste management include federal requirements the department has adopted and other requirements Missouri has added. The Missouri Hazardous Waste Management Commission has the authority to adopt, amend or repeal standards, rules and regulations to implement, enforce and carry out the provisions of the state's hazardous waste laws. This includes any federal regulations where state adoption is required by EPA to ensure the state program remains equivalent to the federal program. The Solid Waste Advisory Board advises the department on various solid waste management issues. State regulations are codified in the Missouri Code of State Regulations (CSR). The Missouri Department of Natural Resources is charged with administering the state regulations found in Title 10 of the CSR. For information about the status of the department's proposed rules that are in the rule development process, please visit the department's Regulatory Action Tracking System.