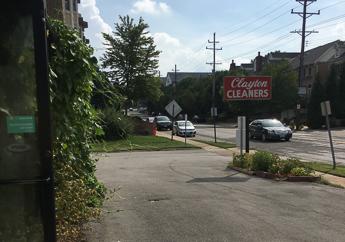 The Clayton Cleaners site is located at 550 North and South Road, in University City. The site has been an active dry cleaning business since 1938, with the exception of when a beauty salon occupied the building from 1953 to 1968. Clayton Cleaners has been in operation at the site since 1988. Until April 2012, tetrachloroethene (PCE) was used during dry cleaning operations, which resulted in contaminated soil and groundwater at the site and surrounding area. Please review the department's Clayton Cleaners Site Sheet - PUB2821 for more details about the site and Superfund investigation.

An environmental contractor, Shifrin & Associates, conducted the earliest environmental site investigations in 1997, documenting PCE contaminated soil. From 2004 to 2017, the current site owner, 550 North and South LLC, conducted site characterization work as part of the department's Voluntary Cleanup Program (VCP) and Drycleaning Environmental Response Trust (DERT) Fund Program. However, this work was not completed before the DERT Program expired in 2017. At that time, VCP referred the site to the department’s Superfund Section for further investigation.