Earthquakes are caused by the abrupt release of stored energy within the earth’s crust. This release of energy is much like the energy released when a stretched rubber band breaks.

The earth renews and recycles its crust every hundred million years. This process, called plate tectonics, creates ocean basins, continents, mountains, volcanoes, and is the source of most earthquakes.

The earth’s crust comprises eight major plates and numerous smaller ones. The plates are continually renewed. Along the lines under the crust, molten material rises from the mantle or semi-liquid interior of the earth. Near the surface, it solidifies, forming ridges. New material, continually forced up from below, spreads outward at varying rates.

Spreading ridges occur in mid-oceanic regions. As new crust is formed, older crust on the opposite edge of a plate is forced downward, back into the mantle and melted. The points where the two plates meet are called subduction zones. 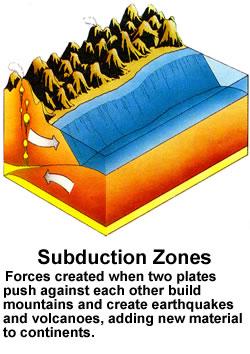 Both mid-ocean ridges and subduction zones are sites of major geologic processes. 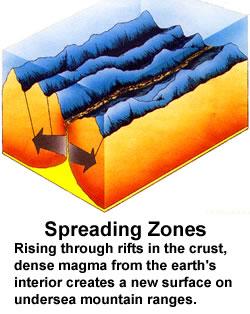 Many of the plates have continents that move with them. When continental margins are near spreading ridges and subduction zones, they too are subjected to extreme geologic activity. 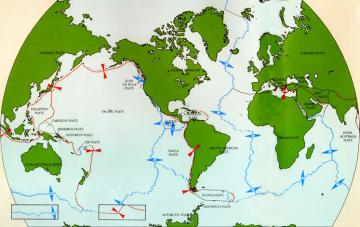 The central portion of plates and continents usually have little geologic activity. Sometimes, however, tensional forces tend to pull plates apart and form rift zones. Any continent located over such a spreading area will be rifted along with the plate. 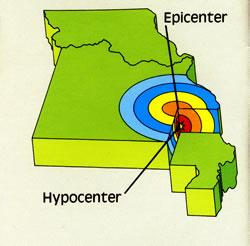 The point within the earth's crust where an earthquake originates is the focus, or hypocenter. The comparable point on the outer surface of the earth, vertically above the focus, is the epicenter. 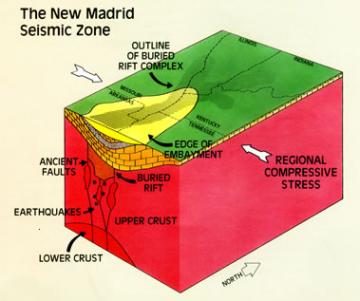 Scientists theorize the New Madrid Seismic Zone is an old rift that began to form millions of years ago but failed to split, reversed direction, and closed. Today, the rift is under great stress as it is being pushed together both from the east and west.

Earthquakes are adjustments to such stresses. Dark areas in the diagram indicate invasions of magma between solid rocks near the edge of the rift.