The Richter magnitude scale is commonly used but often misunderstood. Each whole-number step of magnitude represents a tenfold increase in amplitude. Therefore, the amplitude of a magnitude 8.3 earthquake is not twice that of a magnitude 4.3 quake. Instead, it is 10,000 times as large. 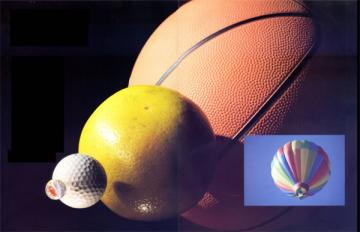 The volumes of the spheres shown here are scaled to illustrate the relative increase in magnitude. At this scale, magnitudes of 1.0, 2.0, 3.0 and 4.0 would be roughly proportional to a small marble, a golf ball, a grapefruit and a basketball.

At the same time, the energy released by an earthquake of magnitude 8.7 could be represented by the sphere the size of a hot-air balloon.