History of Earthquakes in Missouri

Small earthquakes and tremors occur frequently in Missouri. Thousands of quakes have been noted in the state since 1795 and have been recorded since 1908. In recent times, earthquakes have been known to rock tall buildings and crack plaster in Missouri homes. Most were accompanied by numerous aftershocks, which are a series of successive quakes that can cause more damage than the initial shock.

A series of three to five major earthquakes (believed to have been magnitude 7.0 or larger earthquakes) occurred in the NMSZ in the two month period between Dec. 16, 1811 and Feb. 7, 1812. Several thousand additional “smaller” earthquakes occurred during the three month period from Dec. 16, 1811 to March 16, 1812. These included 15 quakes believed to have been magnitude 6.5 to 8.0 (the size range of the 1989 San Francisco, 1994 Los Angeles and 1995 Kobe, Japan earthquakes) and 189 quakes of magnitude 5.0 to 6.5. Two thousand were felt by people, indicated by crude seismograph instruments and recorded in personal journals at Louisville, Kentucky and Cincinnati, Ohio, which are respectively 250 and 350 miles away. The New Madrid area was at the very frontier of European settlement at this time so there were very few non-native Americans living in the immediate area to report the earthquakes. 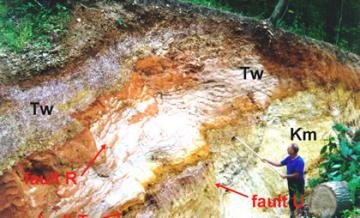 A geologist examines fault lines from the Upper Rainbow trench, an excavation located near the New Madrid Seismic Zone.

In the past 25 years, scientists have learned that strong earthquakes in the central Mississippi Valley are not freak events but have occurred repeatedly in the geologic past.

Geologists, seismologists, and planners caution against developing heavily populated areas on land previously ruptured or shaken by quakes, because these areas are predictable sources of future earthquakes. Earthquakes reoccur along faults, which are fractures in the earth’s crust. Southeast Missouri is part of a mid-continent fault zone that includes eight states. Seismologists regard it as one of the most potentially dangerous earthquake regions in the country.

About 200 shocks are detected annually in the New Madrid Seismic Zone (or Central United States Seismic Zone). Earthquakes in this zone have the potential to cause damage in the states of Alabama, Arkansas, Illinois, Indiana, Kentucky, Mississippi, Missouri, and Tennessee.

Most earthquakes in the region are only detectable by sensitive instruments, but southeast Missouri is disrupted once or twice every 18 months by earthquakes strong enough to crack plaster in buildings. In varying degrees, a major earthquake in the NMSZ would affect all states east of the Rocky Mountains.

Although not recorded by modern instruments, a sequence of earthquakes that occurred near New Madrid in 1811-1812 included three of the most intense ever to occur on this continent. They are believed to have been magnitude 7.0 to 8.0. The New Madrid quakes were followed by aftershocks that continued more than two years. More than 2,000 shocks were felt at least 180 miles away from their epicenters.

Eyewitnesses of the New Madrid earthquakes said, “The surface of the earth rose and fell like the long, low swell of the sea, tilting the trees until their branches interlocked, and opening the soil in deep cracks ... landslides swept down the steeper bluffs and hillsides; considerable areas were uplifted, and still larger areas sunk and became covered with water emerging through fissures ... high banks [of the Mississippi] caved and were precipitated into the river; sand bars and points of islands gave way, and whole islands disappeared.”

New lakes, islands, and streams appeared, and much of the topography of the southeastern corner of Missouri was changed completely. Within three months, the three largest quakes caused vast destruction, distorted lines of sight and level, and flung objects into the air. They were felt throughout 2.5 million square miles and rang church bells in Washington, D.C.