Missouri Skies Now and Then

Our mission is to maintain the purity of Missouri's air to protect the health, general welfare and property of everyone in Missouri. We work hard to improve air quality. While we continue to strive forward in this effort, it is helpful to look back to see how far we have come. We can measure progress in many ways but sometimes pictures can provide dramatic witness to both the past and the present.

The October 1929 Wall Street stock market crash became known as Black Tuesday. About ten years later, Nov. 28, 1939 became known as Black Tuesday in St. Louis when thick black smoke from coal burning emissions turned day into darkest night. St. Louis had problems with smoke pollution for years due to the burning of soft coal to generate heat and power. In February 1937 a Smoke Ordinance was passed. The Division of Smoke Regulation was created in the Department of Public Safety. Raymond R. Tucker was appointed City Smoke Commissioner. Tucker and his staff of 13 smoke inspectors were charged with the task of improving air quality in St. Louis. Tucker utilized the media, at that time newspapers and radio, to educate the public on the benefits of switching to cleaner forms of power. Even though Tucker's smoke inspectors examined furnaces, inspected coal supplies and worked to educate the public, problems still continued. Following Black Tuesday, and nine more days of intense smog at the end of 1939, the city businesses and residents finally came to realize they would have to switch to semi-anthracite coal (hard coal) or natural gas to eliminate the dark days of smog. Improvements were made and the condition changed considerably the next year as noticeable in these photographs.

The photographer who took the black photograph above wrote that he saw a boy, wearing a paper sack with holes cut out for his eyes, selling newspapers.

The following photographs were taken at Twelfth and Olive streets in St. Louis. According to the St. Louis Post Dispatch, motorists often lost their way and wound up on the sidewalks during periods of thick black smog, such as Black Tuesday. Even though it is daytime, the vehicles' headlights cut through the darkness in the photograph on the left. Following the Smoke Ordinance the situation is dramatically improved as shown in the photograph on the right. 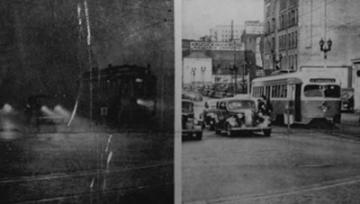 The photograph below on the left was taken at mid-morning on Black Tuesday in the 1300 block of Olive Street. The flame from lighting a cigarette glows brightly in the gloom. A year later the lit match is difficult to detect in the photograph on the right. 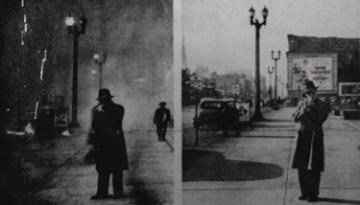 Both of the following photographs were taken on Black Tuesday in St. Louis.

That was Then and This is Now

The Gateway Arch in St. Louis welcomes visitors to Missouri and can be seen for miles. 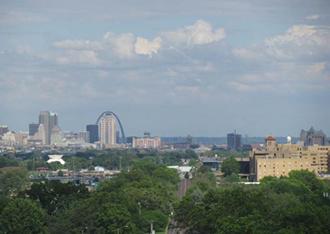 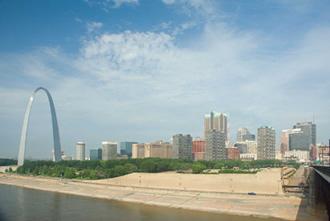 Charcoal Production in the Ozarks 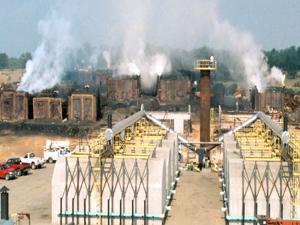 Charcoal production is one of the oldest industries in Missouri. According to the Missouri Department of Conservation, Missouri is the leading producer of charcoal in the United States. Charcoal is made from poor-quality timber and sawmill waste. Seasoned hardwood is sealed in an air-tight chamber and burned with a minimum of air. Charcoal kilns after charcoal kiln smoke regulations put into place. This process could occur in a woodpile buried in a hole in the ground or in metal or concrete boxes called a Missouri-type charcoal kiln. The kilns produced dense, moist, choking smoke.

The Missouri Air Conservation Commission adopted regulations to phase in controls of charcoal kiln smoke in March 1998. The rule, 10 CSR 10-6.330 Restriction of Emissions from Batch-Type Charcoal Kilns, was first put into place on July 30, 1998. By July 2005, thick smoke around charcoal kilns was a bad memory. 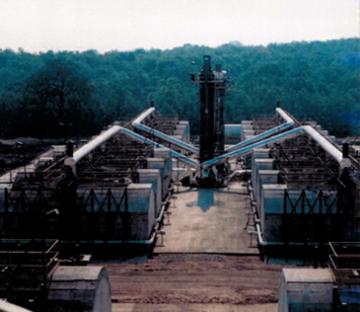