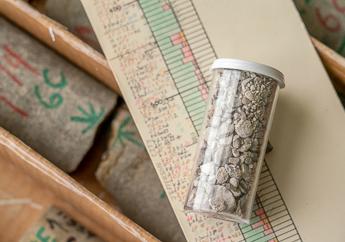 An important component to understanding groundwater is to study the geologic formations that comprise the aquifers where groundwater resides or the confining units that inhibit groundwater movement. This is accomplished by creating wells logs from examining the samples collect during the drilling of wells. Geologists can analyze the samples to determine the lithology, mineralization, geologic structures, and aquifers the well penetrates.

Established in 1853, the Missouri Geological Survey maintains well log files, the most detailed source of Missouri subsurface geologic information. In the early 1900s, MGS struck an informal agreement with the fledgling drilling industry. Drillers would collect and save samples of the rock cuttings from wells each five feet of drilling then send them to MGS where geologists would examine them microscopically, and produce a graphic log of the well that illustrated the geologic data gleaned from the cuttings, along with location, production and well construction information.

Today, logs exist for more than 28,000 wells. Not every well that has been drilled in Missouri has been logged, as there have been several hundred thousand wells drilled over the years. Approximately 3,000 new water wells are drilled every year.

Well logs, cuttings and cores are housed at the department's McCracken Core Library and Research Center. The facility contains nearly 8 million feet of geologic subsurface material that is made available to anyone interested in the subsurface geology of the state. Contact us to schedule a visit.

More than 1,300 handsamples and nearly 1,100 thin sections are stored in our repositories. Specimen locations and other information about each sample are included in the database.

Locations, lithologies and stratigraphic units of outcrops from publications and field notebooks created by our geologists, as well as publications by authors across Missouri are included in the database.

Database of core and cuttings maintained at the department's McCracken Core Library.