The Solid State Circuits Inc. (SSC) site is an area of trichloroethylene (TCE) contamination originating from a former printed circuit board manufacturing facility. SSC operated the facility in the northern portion of a late 19th-century grain mill building at the site. The site is located on less than one acre at the southeast corner of Elm and Main streets, in downtown Republic, Missouri. SSC manufactured printed circuit boards in the building's northern portion from 1968 until 1973. The manufacturing process involved the use of TCE as a cleaning solvent, which was stored and used in the building's basement. A photographic processing firm operated at the site from 1973 until 1979, when the northern portion of the building burned. The burned portion was demolished and debris was pushed into the basement. The basement was filled in; the area is now a vacant grassy lot surrounded by fencing. The land bordering the site is now used for a mix of commercial, industrial and residential purposes.

The Missouri Department of Natural Resources collected water samples from Republic's public water system in June 1982. TCE contamination was detected in Republic's municipal well CW-1, located 600 feet south of the SSC facility. The city took immediate action to remove the well from public use. The discovery triggered further investigations. Between April 1983, and March 1984, a subsequent investigation conducted by SSC contractors identified the facility as the source of TCE contamination in the well. No TCE has been detected in any of Republic's other public or private wells. In 1985, the U.S. Environmental Protection Agency removed more than 2,000 cubic yards of soil from the basement, the soil underneath the basement and assorted debris. EPA filled in the basement with gravel and soil cover to bring it up to grade. In addition, the abandoned basement well was plugged and two wells were installed to extract contaminated groundwater.

EPA placed the SSC site on the Superfund National Priorities List on June 10, 1986. The department and EPA entered into a consent decree with the Missouri Remedial Action Corporation Inc. (MRAC), an entity formed following a series of corporate successions and acquisitions by SSE, and the responsible party for cleanup. The department has overseen site investigation and cleanup actions that MRAC has conducted since that time. 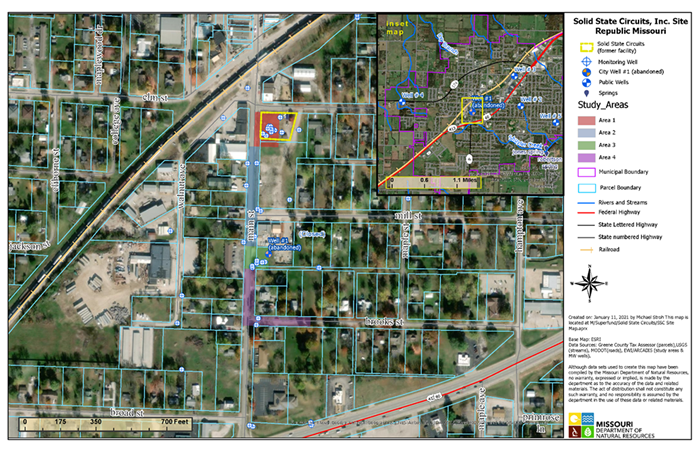 The SSC is organized into four areas of investigation:

Summary of Investigations and Cleanup