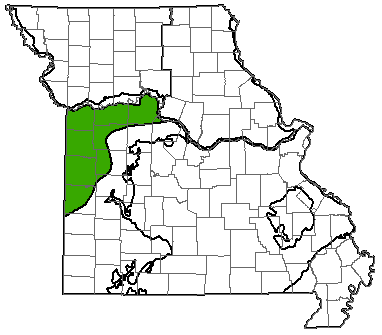 Missouri is divided into eight different groundwater provinces, each with unique hydrologic characteristics. The West-Central Missouri Groundwater Province is in the central western part of the state, covering all or part of 12 counties and approximately 5,080 square miles of area. The western boundary is the Missouri-Kansas border and the northern boundary is the Missouri River. The southeastern border of this groundwater province is marked by the freshwater-saline water transition zone, discussed later in this fact sheet.

Much of the West-Central Province consists of Pennsylvanian-age limestone, shale, and sandstone. Mississippian-age limestone underlies the Pennsylvanian except in eastern Saline County, where it is present at the surface. The shallowest of these units is the Burlington-Keokuk Limestone, a cherty, fossil-rich limestone that is prevalent in the neighboring Springfield Plateau Groundwater Province. 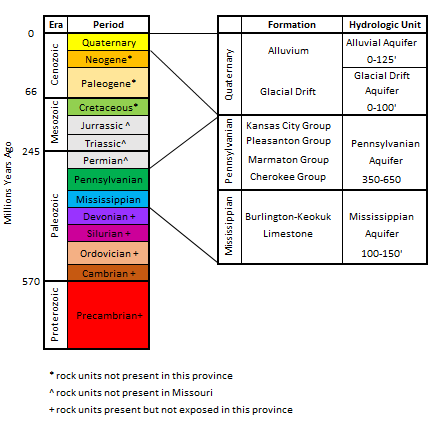 During the Pennsylvanian Subperiod (approximately 300 to 318 million years ago), the local environment cycled between beach and deep marine. This created thin formations of sandstones, shales and limestones that repeat often. A relatively thin layer of glacial till, ranging between 50-125 feet thick (where present), can be seen in the northern part of the province, along the Missouri River.

The West-Central Province lies north of the freshwater-saline water transition zone, where the groundwater resources in the region are poor. Wells shallower than 200 feet deep, drawing primarily out of Pennsylvanian bedrock typically produce small quantities of marginal quality water. Wells drilled deeper than 200 feet typically produce water that is too saline to use without treatment or do not produce enough water to meet basic needs. Some formation groups can locally produce up to 30 gallons per minute (gpm) of water but lower yields from 3-10 gpm are more common. Because of this, most individuals obtain water from a public water supply such as water district, town, or subdivision. 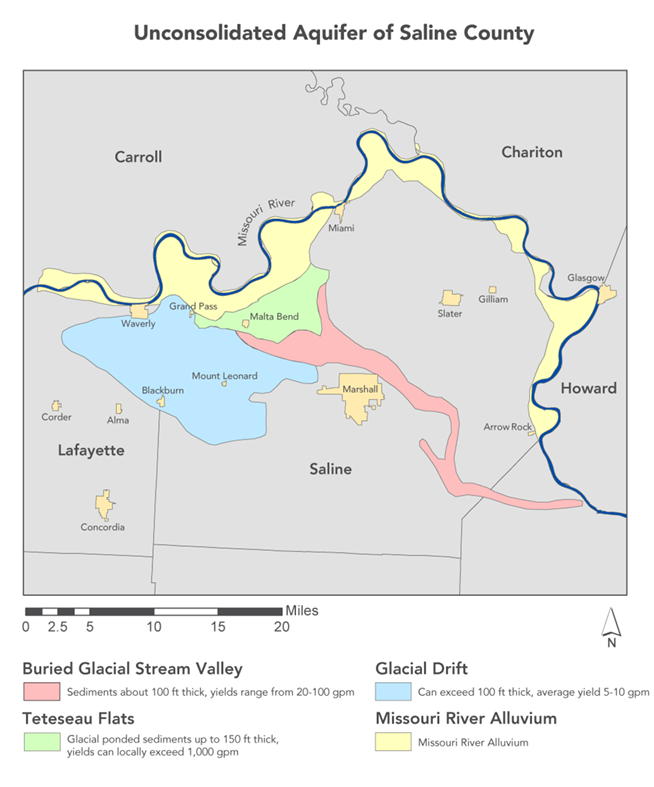 The most significant source of groundwater in the West-Central Province comes from the Missouri River Alluvial and Glacial Drift aquifers. These aquifers are limited to narrow bands adjacent to the Missouri River and in buried glacial channels. The sand and gravel that make up the alluvium and glacial drift are ideal for producing water. However, the thickness of these deposits vary significantly and it is difficult to find channels thick enough to produce sufficient amounts of water. Areas with over 100 feet of glacial drift can produce an average of 10 gpm of good quality water.

One notable exception to the small quantities of water being produced in this province is the area northwest of Malta Bend known as Teteseau Flats. This 28 square mile area is made up of 150 feet of coarse sand and gravel left over from a glacial pond. The larger grains of the sands and gravels allow water to flow through more easily, making it capable of producing more water. Wells in the Teteseau Flats can produce up to 1,000 gpm of water.

Fresh water is classified as having less than 1,000 milligrams per liter (mg/L) of total dissolved solids (TDS). The TDS in the West-Central Province for water produced from the Mississippian formations ranges from just barely potable to over 40,000 mg/L in southwest Jackson County. Even shallow wells drawing from the Pennsylvanian bedrock have a minimum TDS of 450 mg/L but can be as high as 30,000 mg/L. The elevated concentrations are caused by excess amounts of dissolved sodium and chloride. Because of these unfavorable conditions, most of the water used in the West-Central Province comes from surface water sources.
The potential for groundwater contamination in the West-Central  Province is low, due to the low permeability of the underlying bedrock. Surface water and wells in the northern end of the province that are drawing from glacial drift or alluvium are more prone to contamination than bedrock.