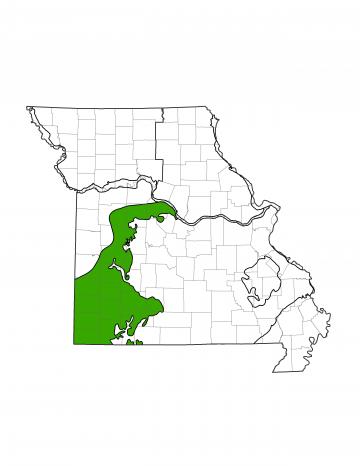 Missouri is divided into eight groundwater provinces, each with its own unique hydrologic characteristics. The Springfield Plateau Groundwater Province is located in the southwestern and west-central side of the state and includes part or all of 27 counties. The province covers approximately 8,900 square miles (12.8% of the state).

Water in the Springfield Province is used for a wide variety of purposes including industry, agriculture, and drinking water. Several cities, such as Joplin and Springfield, heavily rely on surface water for their supply. However, nearly every city pumps groundwater to help meet their water needs. 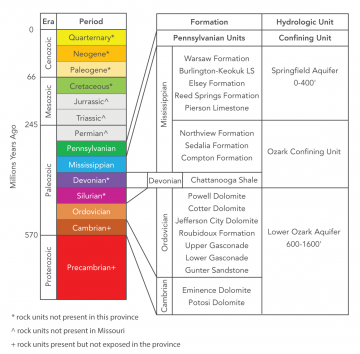 The St. Francois Aquifer is the deepest aquifer in the region and is the most expensive to drill into. Only a handful of cities, such as Sedalia and Carthage, have wells drilled into this aquifer since the Ozark Aquifer is shallower, cheaper to pump, and typically provides enough water. The St. Francois and Ozark aquifers are hydrologically separated by the St. Francois Confining Unit, made up of shales and dolomite with low porosity and permeability.

The Ozark Aquifer is by far the most used aquifer in the province. Many high-producing wells are drilled into and draw water from this aquifer. The most important producing geologic units include the Potosi, Gasconade, and Roubidoux formations. Many shallower domestic wells produce water from the Jefferson City Dolomite. The Potosi has historically been one of the most important formations for cities like Springfield and Branson. Wells in the Potosi formation average 800 gallons per minute (gpm) but can be as high as 2,000 gpm. Heavy pumping can cause significant drawdown of the water table, resulting in decreases of production and increased pumping costs. Though these units still store plenty of water, alternate water sources may be needed in the future. The Roubidoux also serves as a high yielding unit. It can reliably yield 60 to 200 gpm and is used for industrial, agricultural, domestic, and municipal purposes throughout the province.

At only 15 to 30 gpm, the Springfield Plateau Aquifer produces smaller amounts of water than either the St. Francois or Ozark aquifers. However, the aquifer’s shallow depth makes it a good target for private domestic wells. Separating the Springfield Plateau and Ozark aquifers is Ozark Confining Unit composed of shales and limestones. In the western part of the province, the Springfield Plateau Aquifer is overlain by the Western Interior Plains Confining Unit. This confining unit is a series of low-permeability rock units that are Pennsylvanian in age, and cover a majority of western and northern Missouri. Where they are present, these units restrict the vertical movement of recharge water from precipitation to the underlying aquifers.

Recharge to the three aquifers occurs through rainfall. The Springfield Plateau Aquifer is hosted in Mississippian rock that commonly outcrops throughout the province. The formations that comprise the Ozark and St. Francois aquifers are not exposed in the Springfield Province, but are found throughout the neighboring Salem Plateau Groundwater Province. Rain that falls on these outcrops is absorbed into the rocks, slowly trickles down to the water table, and moves laterally beneath the Springfield Plateau Aquifer. Groundwater recharge in the Ozark and St. Francois aquifers is also provided as water moves vertically through leaky confining units from the overlying aquifers.

Water pumped in the Springfield Province is of good quality. Water found in all three aquifers is normally below the standard for Total Dissolved Solids (TDS) of 500 milligrams/liter and water where TDS is higher can easily be treated. The biggest threat in the Springfield Province is human contamination. One of the most common contaminant sources in Missouri is leaking underground storage tanks. The province contains abundant karst features, such as losing streams and sinkholes that allow surface water to flow quickly into the subsurface. If contaminants reach these features, they can spread rapidly and may contaminate many groundwater wells.