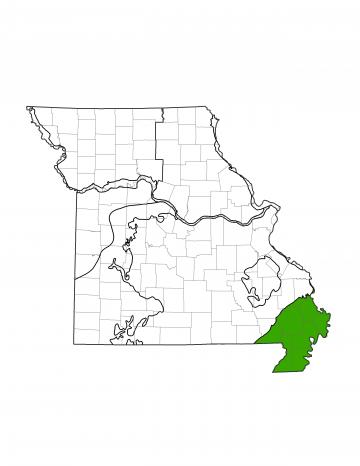 Missouri is divided into eight groundwater provinces, each with its own unique hydrologic characteristics. The Southeastern Lowlands Groundwater Province, commonly known as the “Bootheel,” is located in the far southeastern portion of the state. This province includes all or parts of 11 different counties and is approximately 3,900 square miles in area (5.6% of Missouri).

The Southeastern Lowlands Province is part of the Mississippi Embayment, which extends south from Missouri, covering parts of 11 southern states. Large amounts of sediment and surface material were deposited by the current or ancient Mississippi and Ohio rivers. Beneath this alluvial material is a complex geological system. During the late Cretaceous Period, the region went through structural deformation and down warping that created a trough dipping to the southeast. The Wilcox Group, which was deposited in this trough, increases in thickness from 0 feet in the north to greater than 1,400 feet at the Arkansas border. The Wilcox and older units such as the Porters Creek Clay and McNairy Formation can be seen in outcrops along Crowley’s Ridge. 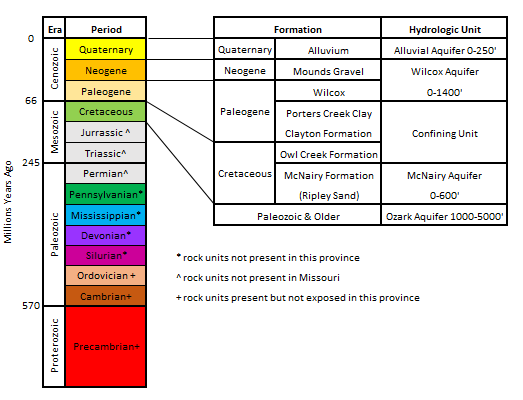 The McNairy Formation, also locally known as the Ripley Sand, yields “soft” water containing only small amounts of dissolved calcium, magnesium, and iron. Many wells drilled into this formation are artesian and need little or no pumping to produce water. Lying above the McNairy is the Wilcox Aquifer. Levels of dissolved iron and manganese are higher in the Wilcox than in the McNairy, but are still much lower than in the overlying alluvium aquifer. Combined, the McNairy and Wilcox aquifers contain approximately 44 trillion gallons of water.

The most heavily used aquifer in this province is the Southeast Lowlands Alluvial Aquifer, which is found at the surface. Made of unconsolidated sands and gravels deposited by the Mississippi and Ohio rivers, the alluvial aquifer holds up to 21 trillion gallons of water. This aquifer is heavily relied on to supply water for irrigation wells, many that are capable of pumping up to 3,000 gallons per minute. Despite the large volumes of water that are pumped from the aquifer, particularly during the summer, the water table remains at relatively stable levels. This is due to precipitation, recharge from the Mississippi River, and upward movement of water from the underlying Ozark Aquifer. However, seasonal drawdown may cause local issues with shallow wells located near deeper, high capacity wells. 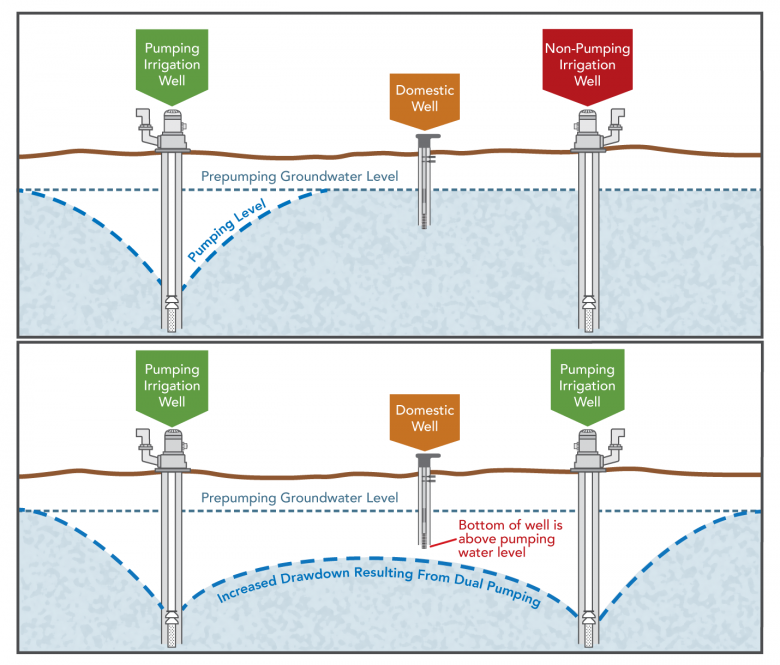 A high capacity well will cause local drawdown in the water table when it is actively pumping, creating what is called a “cone of depression.” If multiple nearby wells are pumping simultaneously, the water table will be lowered even further and cause problems for any nearby shallow wells. Once the pumps are turned off, the water table will return to normal. The depth and duration of drawdown depend on the characteristics of the aquifer. It is important for the department’s Water Resources Center to receive water use data for these high capacity wells in order to better plan for future water usage needs in the Southeastern Lowlands Province.

Most aquifers throughout the Southeastern Lowlands Province contain potable water, though the shallower aquifers have higher concentrations of iron. Contamination is the greatest risk to water quality. If over applied, chemical fertilizers may be carried away by heavy rain into the rivers or into the aquifers via abandoned wells or by percolation through soils to the groundwater. Although environmental incidents in the Southeastern Lowlands Province have been few, proper handling of chemicals is important to maintain the good quality of water.