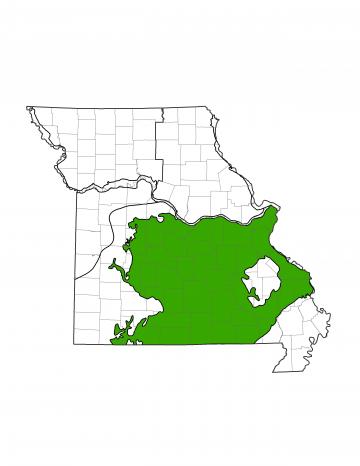 Missouri is divided into of eight groundwater provinces, each with its own unique hydrologic characteristics. The Salem Plateau Groundwater Province makes up most of the southern half of Missouri and covers part or all of 49 counties. This groundwater province is the largest in the state at approximately 24,700 square miles (36% of Missouri).

The Salem Province is home to several cities including Rolla, Lebanon, West Plains, Poplar Bluff, and St. Louis suburbs. Water is primarily used for drinking water and industry, but is also utilized by several hydroelectric dams that generate electricity by spinning turbines with surface water, such as at Bagnell Dam and Harry S Truman Dam, both on the Osage River.

The geology of the Salem Province is dominated by thick sedimentary rock units that were deposited during the Cambrian and Ordovician time periods. Most rock outcrops found in this province are from the Ordovician Period, however, uplift and erosion exposed Cambrian-age units around the St. Francois Mountains. Younger Mississippian and Pennsylvanian-age outcrops can be found in Osage, Gasconade, Franklin, Crawford, Maries and Phelps counties. 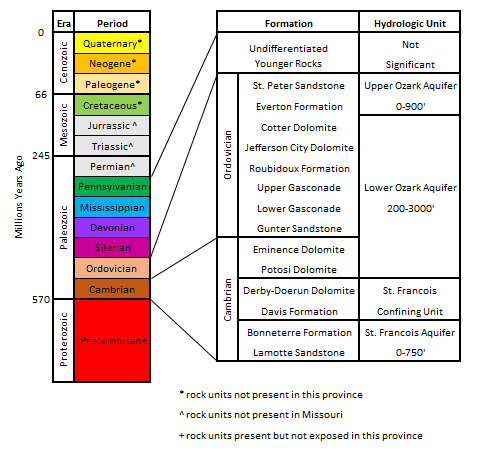 The Salem Province is home to a large number of karst features including caves, sinkholes, and springs. Karst features form when soluble rocks of limestone and dolomite dissolve in slightly acidic water, such as rain water. Small fractures will grow over time, allowing even more water to flow through. Cavities will eventually become caves, collapse to form sinkholes, or form passages that will allow water to travel to the surface and form springs. Karst features have a large impact on groundwater transportation.

The Precambrian-age granites and rhyolites have very few pore spaces and do not allow water to flow through, except along fractures. Due to this low water movement, the Precambrian is considered an aquitard named the Basement Confining Unit.

The St. Francois Aquifer is made of the Lamotte Sandstone and Bonneterre Formation. The aquifer holds approximately 23.7 trillion gallons of usable water, however, the water is not commonly used in this province due to its depth. Several private and domestic wells near the St. Francois Mountains pull water from the Lamotte Sandstone, but a majority of water used in the Salem Province comes from the larger and shallower Ozark Aquifer.

The main source of groundwater in the Salem Province is the Ozark Aquifer, which sometimes divided into the Upper and Lower Ozark aquifers. The Ozark Aquifer is composed of many geologic formations and is normally 800 to 1,000 feet thick, though it can reach 3,000 feet thick at the Arkansas border. The rate that water can be pumped from a well depends on which formations are open for production in the well. Wells drilled into the Potosi Dolomite can produce 800 to 1,000 gallons per minute (gpm) and is the source for many community public water suppliers and other high-yield wells. The Roubidoux Formation can reliably produce 15 to 35 gpm and is tapped by thousands of private, domestic and agricultural wells. On the other hand, the Everton formation, while not poor enough to be considered an aquitard, produces only small amounts of water and is not typically used as a water source. In total, the Ozark Aquifer in the Salem Province is believed to contain 208 trillion gallons of water, nearly 42% of Missouri’s total estimated groundwater supply. The Ozark Aquifer is recharged by precipitation falling on outcrops throughout the state, and may receive up to 14 inches of recharge in a year.

Water in the Salem Province is generally of good quality with low total dissolved solids (TDS). Water can be more mineralized in the northern and eastern parts of the province, and may contain higher amounts of radionuclides.

The karstic nature of much of the Ozark Aquifer allows water to move through it quickly. Pollutants introduced to the aquifer can travel quickly and potentially affect domestic and public wells. Fortunately, once the contaminant source is removed, the aquifer quality will rapidly improve due to fresh water quickly replacing the contamination.