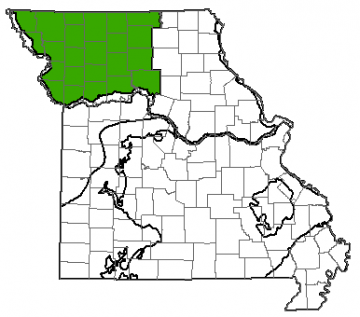 Missouri is divided into eight different groundwater provinces, each with its own unique hydrologic characteristics. The Northwest Missouri Groundwater Province extends over 23 counties and 12,100 square miles from the Missouri-Iowa border to the Missouri River. The water from this province is used by approximately 630,000 people. Most of the groundwater is used for public water supplies, serving towns and cities throughout the region. 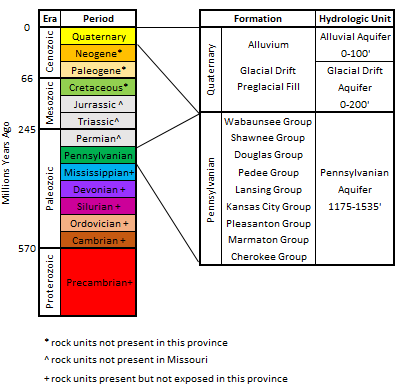 When the glaciers melted, they left the loose material across the landscape. The thickness of the material left behind varies widely across the region. In preglacial valleys, where the elevation was low, glacial deposits can be greater than 250 feet thick. Other areas have no glacial deposits. This change in thickness can occur over a relatively short distance.

Underneath the glacial drift are Pennsylvanian rocks, mostly consisting of thin limestone, sandstone, and shale. This bedrock is present at the surface in some areas where there is no remaining glacial material.

Pennsylvanian bedrock only has potable groundwater at shallow depths. Because the recharge rate is low, due to the multiple layers of shale, it is not usually considered for groundwater use. Where the aquifer is less than 150 feet below the surface, it may contain small quantities of potable water. Deeper aquifers typically contain highly mineralized water.

Groundwater quantity and quality from the glacial drift deposits varies widely. The quantity of groundwater available depends largely on the thickness and composition of the deposits. Most of the groundwater comes from drift-filled preglacial valleys where pre-ice age alluvial deposits were covered by glacial drift. These areas are rich in clean sand containing little to no clay.

However, these valleys are limited and narrow, making up slightly less than 8% of the region. One quarter of the region is made up of glacial deposits composed of 25-100 feet of clean sand. These areas are not as good as the preglacial valleys for water production, but can produce groundwater yields up to 25 gallons per minute, which is sufficient for domestic needs. The majority of the Northwest Province contains less than 25 feet of clean sand where it is difficult to produce sufficient quantities of water to meet needs. 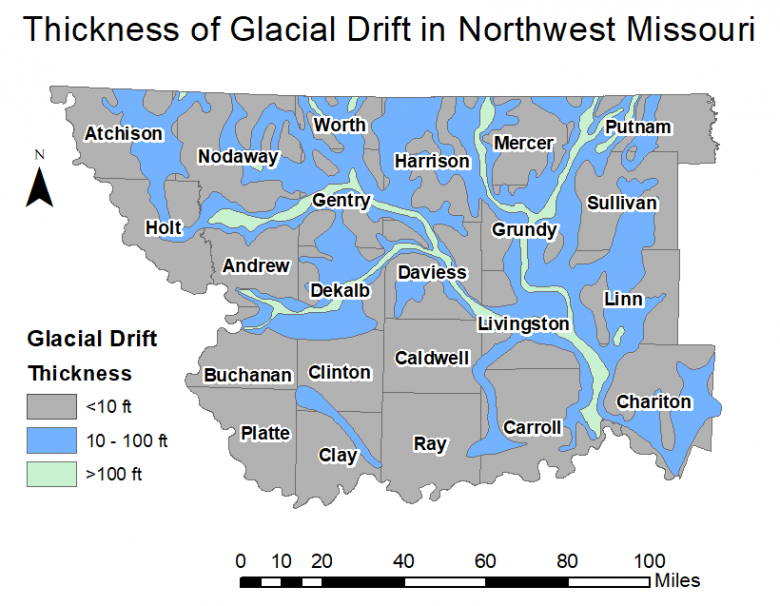 It is estimated that the glacial drift aquifer in this province contains 8.80 trillion gallons of water. This is equivalent to 27 million acre-feet.

The more recent alluvial aquifer, beneath the floodplains of current rivers and streams, is an important resource of groundwater in the Northwest Province. The materials making up this aquifer tend to be sand and gravel, making it ideal for water production. Like the glacial drift, the alluvial deposits are narrow and not more than approximately 50 feet deep, limiting the extent of groundwater available. The best alluvial deposits in the province, apart from the Missouri River, are along the Grand, Platte, One Hundred and Two, and Thompson rivers and Locust Creek.

Fresh water is classified as having less than 1,000 milligrams per liter (mg/L) of total dissolved solids (TDS). The TDS of the groundwater in the Northwest Province is highly variable, ranging from 400-1,500 mg/L in the glacial drift deposits and greater than 40,000 mg/L in groundwater produced from the deeper bedrock aquifers. This water contains excessive amounts of sulfate, chloride, iron and manganese.

Contamination of groundwater is possible but is more often due to local problems such as agricultural runoff or private septic problems, than a widespread aquifer issue. In many regions where the glacial drift is thin and contains little clean sand, large-diameter wells are drilled to increase inflow area and storage capacity. These wells are generally shallow, making them more susceptible to contamination.