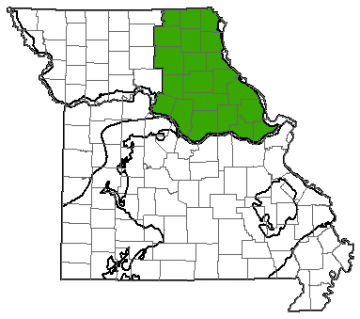 Missouri is divided into eight groundwater provinces, each with its own unique hydrologic characteristics. The Northeast Missouri Groundwater Province is made up of 21 counties encompassing approximately 12,000 square miles of the state. The province extends north to south from the Missouri-Iowa border to the Missouri River and east to west from the Mississippi River to the Northwestern groundwater province. 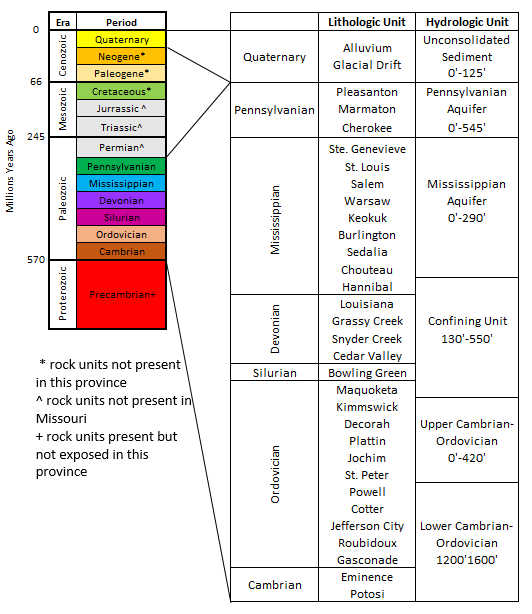 The oldest geologic units found in the Northeast Province are Ordovician in age. They can be seen at the surface in Lincoln, Pike and Ralls counties where they were uplifted by the Lincoln Fold. The Upper Ordovician formations from the St. Peter Sandstone to the Maquoketa Shale can be found here and are made up of dolomite with some sandstone and shale. Lying above these are Mississippian-age units primarily composed of limestone.

Pennsylvanian Epoch rocks are present only in the western and northern parts of the province, where they were not uplifted and eroded away. These units consist of shale, siltstone, sandstone, and occasional coal.
The glacial drift in Northeast Missouri ranges from 0 to 300 feet thick and is generally thicker in the northern portion of the province. This material predominantly consists of clay and silt with minor amounts of clean sand. These sediments were deposited by glaciers as they retreated northward at the end of the last ice age, the Pleistocene Epoch (approximately 12,000 years ago).

Water can be produced from surface water, such as rivers or lakes, or from groundwater. Groundwater is most commonly found in sedimentary rocks, where it is stored in the spaces between mineral grains. Wells are drilled into these rock units and water is pumped to the surface. Geologic units that can store and release water at a useful rate are called aquifers, while geologic units that restrict groundwater flow are known as aquitards or confining units.

The Northeast Province is divided by the freshwater-saline water transition zone. Deep wells drilled in the Cambrian-Ordovician Aquifer north of this boundary contain high amounts of sodium chloride and other minerals that make water undesirable to drink unless treated. The Cambrian-Ordovician Aquifer can produce potable water south of the freshwater-saline water transition zone. Wells that fully penetrate this aquifer are capable of producing more than 1,000 gallons per minute (gpm). This aquifer contains an estimated 60 trillion gallons of usable water.

The Mississippian-Silurian-Devonian Confining Unit is a series of limestone and shale layers that restrict the vertical movement of water. Wells drilled in the Mississippian Aquifer typically produce between 3 and 15 gpm. Drilling too deep into this aquifer north of the transition zone also produces mineralized water. The transition zone makes the amount of potable water difficult to calculate because not all of the water coming out of the aquifer is usable. The Mississippian Aquifer contains an estimated 18.5 million gallons of fresh water, with most of that water being south of the freshwater-saline water transition zone.
Wells producing from Pennsylvanian units are limited and generally cannot produce sufficient amounts of water. Yields are typically less than 10 gpm. 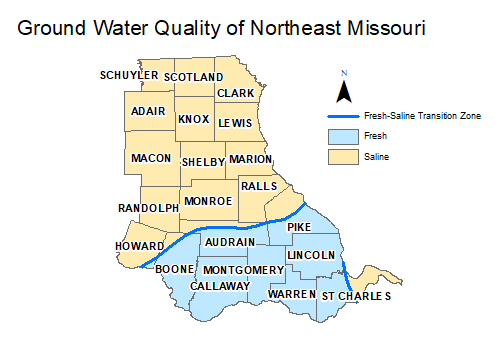 For many Missourians north of the transition zone in the Northeast Province, the glacial drift aquifer contains the only available usable groundwater. The water table in this aquifer is shallow and fluctuates in response to precipitation. Most wells that produce from this aquifer are shallow, large-diameter wells that are able to hold more water than traditional wells. This acts as a subsurface reservoir for pumping while the aquifer slowly recharges the well.

Fresh water is classified as having less than 1,000 milligrams per liter (mg/L) of total dissolved solids (TDS). TDS in northeast Missouri varies by aquifer and location because of the freshwater-saline water transition zone. North of the transition zone, water from the Cambrian-Ordovician Aquifer can have TDS that exceed 10,000 mg/L. South of the transition zone, this same aquifer generally has TDS less than 1,000 mg/L.
Large-diameter wells are common in this region of Missouri and are more susceptible to contamination than conventional wells. They are usually shallow and often do not have casing that is effectively sealed. Poor waste disposal and animal waste runoff can leak into these wells and contaminate the aquifer. The southern area of the province has several extensive karst features and sinkholes. Trash dumped in these features serves as a source of pollution and can easily contribute to groundwater contamination. Due to all these factors, it is important for residents of northern Missouri with private wells to test their groundwater regularly for water quality.