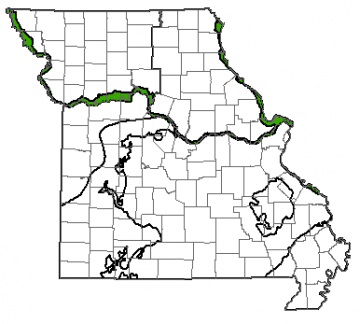 Missouri is made up of eight groundwater provinces, each with its own unique hydrologic characteristics. The Mississippi and Missouri River Alluvium make up a small but important portion of the state’s groundwater resources. 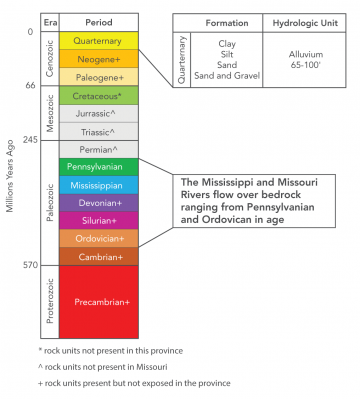 As water flows through a river channel, sediment is deposited along the banks. This sediment is called alluvium. The alluvium thickens as the river meanders back and forth while depositing more material. Alluvium is made of fine to medium gravel, fine to coarse sand, silt and clay.

The Missouri River roughly marks the furthest extent of Pleistocene-age (ending approximately 12,000 years ago) glaciers in Missouri. As these ice age glaciers moved south, the Missouri River moved with it, flowing around their southern edge. When the glaciers melted, large volumes of water flowed down the river, eroding glacier deposited sediments and redepositing them as alluvium. When the meltwater receded, the path of the Missouri River had permanently changed, and alluvium was left in the floodplain as deep as 150 feet.

Water can be produced from surface water, such as rivers or lakes, or from groundwater. Groundwater is most commonly found in sedimentary rocks, where it is stored in spaces between mineral grains or in fractures in the rocks. Wells are drilled into these rock units and water is pumped to the surface. Geologic units that can store and release water at a useful rate are called aquifers, while geologic units that restrict groundwater flow are known as aquitards or confining units. 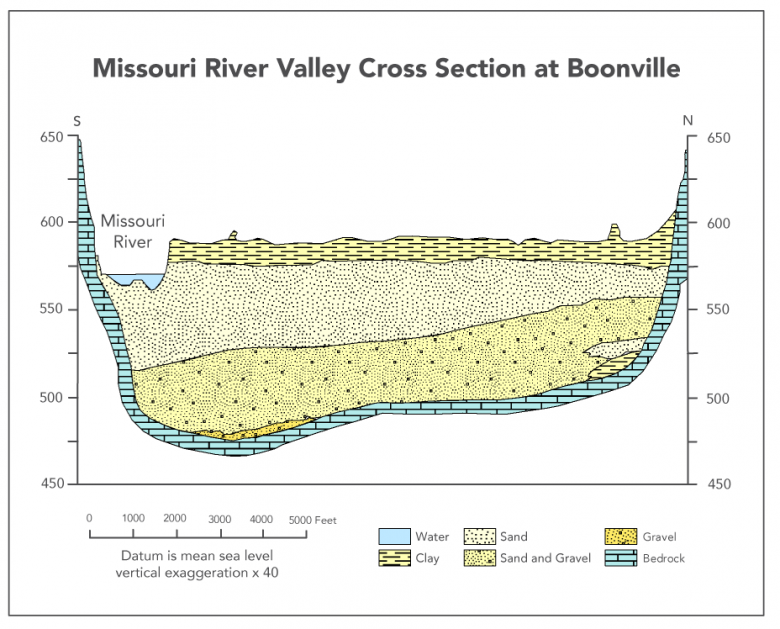 The Missouri and Mississippi alluvial aquifers are recharged by precipitation on the floodplain from neighboring bedrock layers, and from the rivers that flow over them. There is a direct relationship between the groundwater levels and the stage of the river water.
Alluvial aquifers are confined within the bedrock the river has eroded over time. Over the 485 miles the Mississippi River runs along Missouri, approximately 440 square miles of alluvium is deposited on the west side of the river and is thick enough for water production. This is excluding southeast Missouri, commonly known as the “Bootheel,” which is discussed in the Southeast Lowlands Groundwater Province fact sheet, PUB3001.

Alluvial deposits in this province are typically thickest directly adjacent to the river and can be as much as 170 feet deep. Because of the varied thicknesses across the region, test wells are usually necessary before determining if a well will yield enough water. Wells drilled in areas where there is a large amount of alluvium are capable of producing between 500 and 2,000 gallons of water per minute (gpm). Because of this, they are often used for municipal water supplies and for agricultural irrigation. Many cities such as Kansas City, Columbia, and St. Charles rely on water from wells drilled into river alluvium. Figure 1 depicts an approximate cross section of the Missouri River alluvium near Boonville.

Fresh water is classified as having less than 1,000 milligrams per liter (mg/L) of total dissolved solids (TDS). The TDS in the Mississippi and Missouri River alluvium is generally very good, ranging from 20 mg/L to 750 mg/L. Both systems tend to have elevated levels of iron and manganese.
The potential for groundwater contamination in alluvial systems is high. Sandy sediments allow fluids to travel quickly to the water table, making it easy for pollutants to contaminate groundwater. Great care must be taken with man-made contaminants like landfills and chemical storage areas to ensure they cannot adversely affect water quality.