Cobalt is a hard, lustrous, bluish-white to silver white metal primarily used in alloys. Cobalt compounds were used for millennia, but the elemental metal itself was not discovered until the 1730s by Swedish Chemist Georg Brandt. The name cobalt is derived from “kobald,” a German goblin. The term was first applied in the 1500s by miners who, when attempting to smelt ores for copper or nickel, also ended up with a cobalt oxide compound that often volatilized arsenic oxide, thereby adding to the infamy of the ore. Interestingly, the Greeks also have a mischievous creature called Kobalos, although there is no record of ties between this name and cobalt.

Cobalt is classified as a critical element by Secretary of the Interior’s 2018 Executive Order 13817 (Federal Register, 2018) due to its use in military applications and green energy. The U.S. imports more than 70% of the cobalt it uses, with most domestic production from recycling of scrap materials (U.S. Geological Survey, 2020). Current U.S. mine production of cobalt is less than one percent of world mine production (U.S. Geological Survey, 2020).

Missouri is one of only a few areas in the continental United States known to have produced cobalt and to contain potentially significant cobalt reserves. Increased demand for cobalt has led to increased cobalt prices, averaging $15 per pound during 2019 (U.S. Geological Survey, 2020). The potential exists for cobalt to be a factor in Missouri's economic outlook.

Cobalt is used in super alloys, magnets, corrosion-resistant alloys, high speed steels, cemented carbides and battery electrodes. Two uses that have led to recent increased demand include super alloys in military applications and batteries for electric vehicles. It also is used as dye for pottery glazes and can be altered to a radioactive isotope used for cancer treatment.

Cobalt has been used since at least 3000 B.C. as a blue pigment for ceramic glazes, jewelry and glass. It has been found in ancient Egyptian and Persian artifacts, and in glass from Pompeii. During the 1800s it was a popular blue dye for textiles. 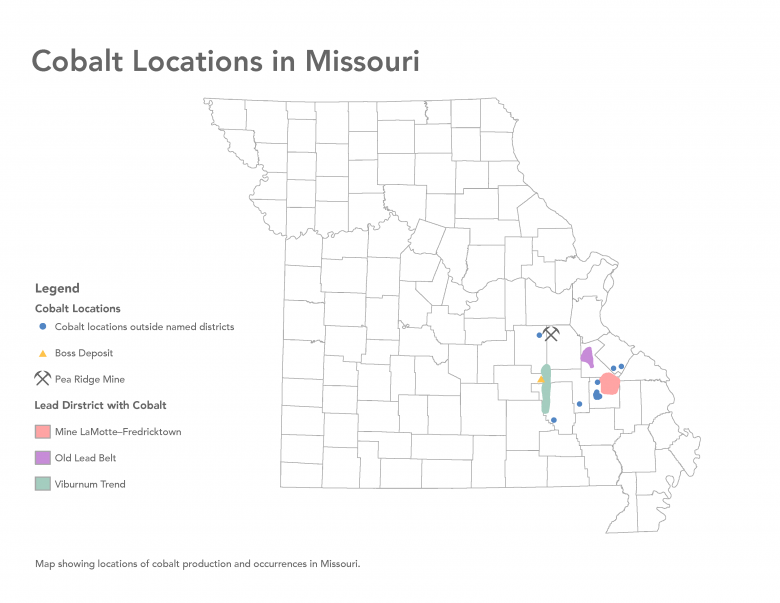 Principal Locations of Cobalt in Missouri

Scattered occurrences of cobalt are found in southeast Missouri and are associated with copper and manganese mineralization (see map).

In the Viburnum Trend, cobalt is found with lead and zinc mineralization hosted by the Cambrian-age Bonneterre Formation, a sequence of carbonate rocks that formed during a shallow marine advancement over a continental shelf. The Bonneterre Formation overlies the porous Lamotte Sandstone and the igneous Precambrian basement and is overlain by the Davis Formation. Mineralization in the Viburnum Trend is believed to be related to relationships between basement topography and stratigraphic pinch-outs. While small amounts of cobalt and nickel are present in mines throughout the Viburnum Trend, they vary in concentration throughout the district. Cobalt occurs primarily as siegenite, with fletcherite found in localized occurrences, and rare carrollite.

In the Mine LaMotte-Fredericktown subdistrict, lead-zinc-copper-cobalt mineralization occurs at generally shallow levels about 250 to 400 feet from the surface in the lower Bonneterre Formation and the upper Lamotte Sandstone. Ore bodies tend to be in arcuate shapes localized near pinch-outs of the Lamotte against buried Precambrian igneous knobs. In this subdistrict, cobalt and nickel amounts are generally 10 times higher than in the Viburnum Trend, and predominantly occur as siegenite, bravoite and millerite.

Cobalt occurrences have been documented in the Precambrian basement of Missouri as mineralization associated with iron oxide deposits such as the Boss deposit. The Boss deposit is hosted in intermediate igneous rocks in the Precambrian basement and is overlain by more than 1,000 feet of sedimentary rock. Cobalt minerals described include carrollite, with cobaltite and cobaltian pyrite also noted. Cobalt has also been noted in the Pea Ridge Iron-oxide deposit, which contains cobaltian pyrite.

Cobalt is also known to occur with manganese deposits in southeast Missouri, especially those associated with extensive weathering of Paleozoic sedimentary rocks.

Ores containing cobalt have been mined in the subsurface in the past. Ores were blasted, crushed, transported to the surface, crushed further, and separated from other metal ores, non-ore minerals, and host rocks in a mill. Ores were then smelted to generate cobalt metal.

There are several resources available regarding cobalt and other metallic minerals through the Missouri Geological Survey. Scanned mine maps in the Missouri Mine Map Repository are accessible for viewing on-line and images can be purchased by contacting the publications desk at 573-368-2100. Document and publication titles regarding cobalt can be browsed on the Missouri Geology Bibliography webpage. The department’s McCracken Core Library and research facility has core from Mississippi Valley Type and iron oxide deposits. Databases such as the Inventory of Mines, Occurrences and Prospects can be downloaded as a KMZ file or as an ESRI layer package through the department’s GeoSTRAT application. Historical files, commodity files, and mine maps not currently scanned in the library are available for public viewing and inspection upon request. If you would like to visit our Rolla office regarding documents on metallic minerals in Missouri, please contact call 573-368-2100.

Visit the department’s Ed Clark Museum of Missouri Geology, where you will find cobalt samples on display.