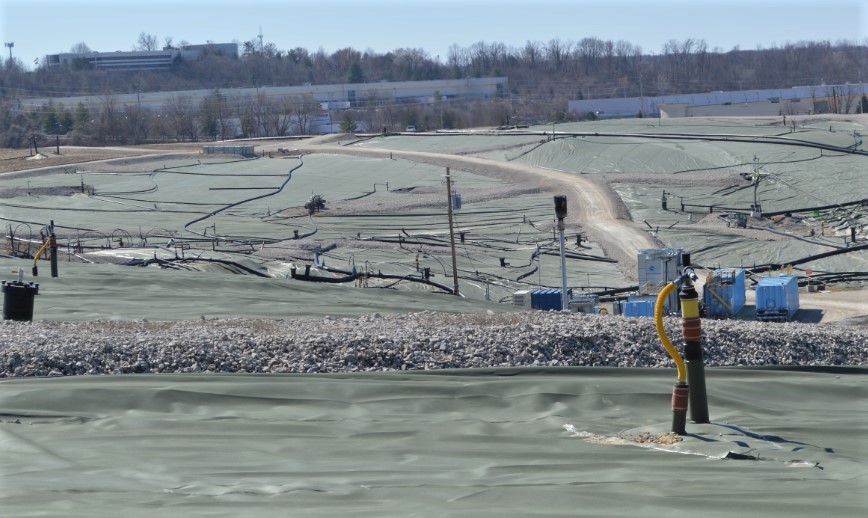 Landfill gas collection and control infrastructure and liner on top of the Bridgeton Sanitary Landfill. Photo taken by MoDNR staff standing on the landfill’s North Quarry, looking southeast over the South Quarry.

The Bridgeton Sanitary Landfill is one of several former waste disposal areas located within the 200-acre West Lake Landfill site, located at 13570 St. Charles Rock Road, in Bridgeton. Past activities at the West Lake Landfill site include mining limestone and landfilling industrial wastes, demolition debris and municipal solid waste. The Bridgeton Landfill, which was initially permitted on Nov. 18, 1985, accepted municipal solid waste. The waste is located in two distinct areas known as the North and South Quarries. The Bridgeton Landfill stopped accepting waste on Dec. 31, 2004, as the result of an agreement with the City of St. Louis to reduce the potential harm to airport operations from birds that may be attracted to a sanitary landfill. The Bridgeton landfill waste mass encompasses approximately 52 acres, with approximately 240 feet below the ground’s surface and a total waste thickness of 320 feet. The site boundaries are noted on the West Lake Landfill National Priority List Site map.

The Bridgeton Sanitary Landfill currently is owned by Bridgeton Landfill LLC and is a subsidiary of Republic Services Inc. On Dec. 23, 2010, Republic Services reported to the department's Waste Management Program that the landfill was experiencing elevated temperatures on some gas extraction wells. Since that time, a subsurface smoldering event has enveloped much of the South Quarry, as evidenced by rapid settlement an increase in odors and leachate production. Over the years, the landfill owner has been required to implement corrective actions to control and manage the landfill gas emissions (odors) and leachate production from the rapid waste decomposition. Currently, the Bridgeton Sanitary Landfill is in a managed state. As required by a Consent Judgment, signed June 29, 2018, the landfill owner will continue operating, monitoring and maintaining the landfill infrastructure. Data collected under the consent judgment monitoring requirements shows the overall magnitude of the subsurface smoldering event is continuing to slowly decrease. For details about this subsurface reaction event and other events and monitoring that have occurred at the landfill since1992, visit Bridgeton Site Background.

The following monitoring reports, engineering plans and data are being made available on this website due to the level of interest regarding activities at the site. These documents are available for informational purposes only.

This page provides citizens with access to pertinent information and online forms regarding ongoing compliance issues and activities related to a subsurface smoldering event and associated orders around Bridgeton Sanitary Landfill at 13570 St. Charles Rock Road in Bridgeton.

This website is updated as information becomes available. If you have questions about document availability send an email to wmp@dnr.mo.gov.

The documents provided are electronic copies and are being provided for reference only. The official records may be reviewed at the Waste Management Program’s Office in Jefferson City at 1730 E. Elm Street. For documents originating from other sources, the department takes no responsibility for the views, content or accuracy of the information provided. Where necessary due to privacy laws and other legal statutes, the original document may be redacted to keep protected information confidential.