Shells of bivalves are composed of two separate valves, typically about the same size. They often nearly mirror one another. The valves are bound together with a bendable ligament (band of tissue) along a hinge line on the dorsal (back) side of the shell. Bivalves have a soft body with organs, gills, a foot, two siphons or tubes used for exchange of air or liquids, and two adductors (muscles) used to open and close the shell where it is not hinged. 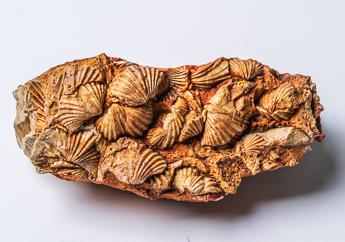 The fossil record shows they are a hardy group that fared well through geologic time. Bivalves withstood the rigors of mass extinction events perhaps better than any other animal group. Bivalves have diversified and expanded to become dominant members of most marine ecosystems.

Bivalves typically range in size from 1 to 4 inches. The smallest are visible using weak magnification, whereas the largest can be massive. An extinct fossil representative from Cretaceous-age (approximately 145 to 66 million years ago) strata in western Kansas is 5 feet long and 3 feet wide. A modern clam living in the South Pacific and Indian oceans is 3 feet long and weighs more than 600 pounds.

Bivalves spend their lives either continuously or intermittently submerged in marine and freshwater environments. They inhabit several different environments such as reefs, beaches, bays, lagoons, swamps, rivers, streams and lakes. Some live permanently attached while others use their foot to crawl around slowly or burrow into sandy and muddy sediment. Others, like scallops, can swim a short distance by rapidly flapping their valves. Unusual bivalves, known as shipworms, can use their specialized shells to bore tunnels into wood.

Bivalves breathe and feed by circulating water with their system of siphons. Water is sucked in through the inhalant siphon, passes through a layered arrangement of gills, where carbon dioxide waste is exchanged for oxygen and microscopic food particles collect on cilia. Liquid and solid wastes are added to the flow before it exits through the exhalent siphon. Bivalves that live buried in sediment have long siphons that can be extended into the open water above. Bivalves close their shells tightly (clam up) when disturbed or subjected to adverse environmental conditions. When closed, they can wait out dry spells until water returns to submerge them once again. The burrowing and boring species are capable of withstanding dry conditions longer than those whose lifestyles make them vulnerable to becoming stranded out in the open direct sunlight.

Bivalves are a group of aquatic mollusks with shells usually made up of calcium. They include clams, mussels, cockles, oysters and scallops. Bivalves have been around more than 500 million years, with the oldest fossils found in sedimentary rocks deposited during middle Cambrian (approximately 500 million years ago) times. Today, bivalves are at their peak diversity with thousands of species.

Bivalves and other fossils are on display in our Ed Clark Museum of Missouri Geology. They also are found in the limestone walls of the Capitol in Jefferson City.