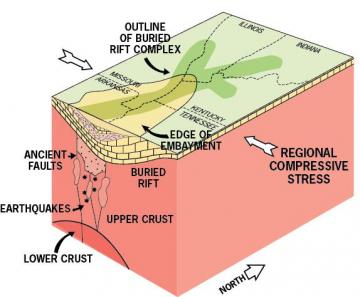 Mountains. It covers parts of Arkansas, Illinois, Kentucky, Missouri and Tennessee. While seismic zones in surrounding states can also affect Missouri, the primary earthquake hazard in the mid-continent is the NMSZ. More than 200 earthquakes occur in the region each year, but most are too small to be felt by humans. Major earthquakes can occur in the area, with three of the largest earthquakes ever to strike the continent happening in 1811 and 1812 in the NMSZ.

A seismic zone is an area with multiple faults that is subject to frequent earthquakes. Earthquakes occur when pressure builds up on both sides of a fault. When the fault sides slip against one another, they cause a sudden release of energy, or earthquake. Earthquake locations are marked by the epicenter, the point on the earth's surface vertically above the movement. The NMSZ is 125 miles long and contains multiple faults that extend from Marked Tree, Arkansas, to Cairo, Illinois. The faults are not visible at the surface, but are buried deeply below thick layers of floodplain sediments deposited by the Mississippi and other rivers. Faults that are not visible at the surface are harder to study, making it difficult to understand the true nature of faults in the NMSZ.

Magnitude is the total energy released by the ground motion caused by an earthquake and is a scientifically measured number. The Richter Scale is the most widely used magnitude scale. Richter magnitudes are based on a logarithmic scale. This means that for each whole number you go up on the Richter scale, the energy released is 32 times greater and causes 10 times the ground motion. Using this scale, a magnitude 6.0 earthquake would result in 10 times the level of ground shaking as a magnitude 5.0 earthquake. The intensity of an earthquake is related to the damage it causes; therefore, the intensity often depends on the distance from the earthquake's epicenter. The Modified Mercalli Intensity scale (MMI) is used by insurance companies and emergency planners to determine areas of greatest damage. A single earthquake of a specific magnitude will generally have different MMI intensities at different locations.

Most earthquake-related injuries and fatalities occur due to the strong ground motion, which results in destruction of man-made structures including buildings, bridges, roads and dams. Injuries and fatalities also occur due to related effects, such as floods from dam failures, explosions and fires from gas pipeline breaks and dangers from broken power lines. Moving or falling objects such as shelves, furniture and broken glass, may also cause injury and death. Transportation, communication, power, water supply and sewer systems may also be disrupted when earthquakes occur. Other hazards caused by earthquakes include ground fractures, landslides, uplifting or sinking of the ground and liquefaction. Liquefaction occurs when firm soil is shaken by the earthquake and liquefies, resembling quicksand that can flow up to the surface. Liquefaction causes sandblows (eruption of sand from underground layers), landslides, mud flows and sinking of the land, often causing structures to shift on their foundations. The sandy soils in southeast Missouri are very susceptible to liquefaction, posing a serious hazard to structures in the NMSZ. Additional hazards occur when steep slopes collapse, blocking and causing flooding or shifts in river channels. Due to different geology in the central United States, earthquakes in the NMSZ can damage an area approximately 20 times larger than earthquakes in California and most other active seismic zones.

A series of major earthquakes occurred in the NMSZ between December 16, 1811, and March 16, 1812. Fifteen earthquakes with estimated magnitudes of 6.5 to 8.0 occurred during this time, including three to five earthquakes magnitude 7.5 or greater. There were also 189 earthquakes magnitude 5.0 to 6.5 and thousands of smaller earthquakes. Some of the quakes were felt more than 1,000 miles away. In comparison, the 2010 earthquake in Haiti was magnitude 7.0, while the 2011 earthquake in Christchurch, New Zealand was magnitude 6.1. New Madrid was a sparsely populated frontier town in 1811; yet, there was loss of life and damage to buildings. The land was damaged so extensively that it was unusable for the subsistence agriculture of that day. Today, the potential for destruction, death and economic loss in the area is enormous.

It is impossible to predict when or where an earthquake might occur. But, by studying evidence from current, historic and prehistoric earthquakes, seismologists can estimate the average long-term frequency of large earthquakes and estimate the probability of future earthquakes. The exact frequency of large earthquakes in the NMSZ is still being debated, but scientists agree that in addition to the 1811-1812 major quakes, two or more additional major earthquakes (magnitude 7.0 or larger) have occurred in the area during the past 2,000 years. Therefore, the probability exists for a future, large magnitude earthquake in the NMSZ. A large magnitude earthquake in the New Madrid Seismic Zone would cause major damage in southeastern and eastern Missouri, northeastern Arkansas, southern Illinois, and western Kentucky and Tennessee. Significant damage could extend north of St. Louis along the Mississippi River valley, up the Ohio and Wabash river valleys into Kentucky and Indiana, and down the Mississippi River valley into Mississippi.