Chert, prized by Native Americans but despised by many farmers, is one of Missouri’s most common rocks. It has all the characteristics which can make a stone both hated and hunted, coveted or cursed. 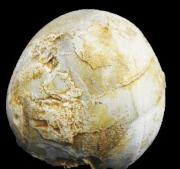 Chert is also a rock of many names and disguises. Few people other than geologists actually call it chert, which is generally applied to the stone when its color is white, tan or light gray. Red, brown, reddish-brown and yellowish-brown varieties are called jasper. Black and dark gray specimens are known as flint. Mottled and pink types are called Mozarkite, while some banded varieties have found a home in the agate family.

Despite appearance, all forms of chert have the same basic composition. It is a hard, brittle sedimentary rock composed of finely crystalline quartz and its chemical base is silica (SiO2). The presence of impurities gives the stone colors other than white.

It is the stone’s hardness and the way it breaks that made it invaluable to Americans Indians. They used chert to make arrowheads and scraping and cutting tools because it breaks with a curved or shell-like fracture, leaving edges as sharp as broken glass. Artifact collectors generally call the stone flint. While 17th century era long-barreled muskets used varieties of natural flint for their strikers, modern gas burners and cigarette lighters do not use natural flint.

Missouri’s 19th century tillers of the soil cursed chert because it dulled their plows; they had no other use for this rock, which seemed underfoot nearly everywhere. That is because this almost non-soluble rock is embedded in and between layers of soluble limestone and dolomite, the common sedimentary rocks of Missouri.

Gravel operations often excavate chert from Ozark streams and crush it for use as an aggregate in road construction. However, the stone will quickly wear out a crusher because it is harder than steel. Chert occurs as nodules, lenses, stringers and irregular masses. As the softer limestone and dolomite are eroded away, durable residues of chert are left behind to wash off hills and slopes and into streams and rivers where they cover streambeds to form gravel bars.

These and other “clean” rocks, is partly why Ozark streams often look so clean and pure. 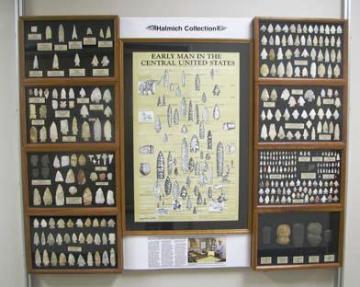 The more than 200-piece collection includes spear, dart and arrow points, knives, scrapers, drills and adzes. According to Pat Mulvany, a division geologist and resident Indian artifact expert, the artifacts in Halmich’s collection range in age from the Paleo-Indian Period (10,000 BC) to the Mississippian Period (AD 1400). Projectile point styles, from oldest to youngest, include Clovis, Dalton, Graham Cave, Osceola, Etley, Langtry, Snyders, Scallorn, Sequoia, Reed and Cahokia. Most of the points are made of various Missouri cherts, but a few are Missouri rhyolite. The adzes are composed of diabase, an igneous rock.

The artifacts are displayed in an archaeological manner that chronicles man’s dependence on industrial minerals.

Industrial minerals are the nonmetallic, mined commodities that promote development and sustainment of civilization. Limestone is an example of an extremely important modern industrial mineral. It is used to manufacture lime, Portland cement and aggregate.

Without limestone, we would not have buildings, roads and bridges, as we know them today.

Halmich’s artifacts demonstrate that ancient man also depended heavily on a different industrial mineral, one that is not used much anymore. That mineral is chert, which breaks with a sharp edge. Ancient craftsmen shaped chert into a variety of specialized tools for cutting, piercing, drilling and scraping. Their livelihood depended in large part on the mining and processing of chert. Halmich began collecting artifacts in east-central Missouri in 1929 when he was just a boy. The collection represents his lifelong passion for hunting artifacts in the hills and valleys of the Ozarks.

Each year, hundreds of school children and adults tour the instructive exhibits of minerals, rocks, fossils and maps that are housed in the division’s Ed Clark Museum of Missouri Geology in Rolla. Thanks to Halmich’s generous donation, visitors are also treated to this fascinating arrowhead display.

Visit the department’s Ed Clark Museum of Missouri Geology, where you will find chert on display.