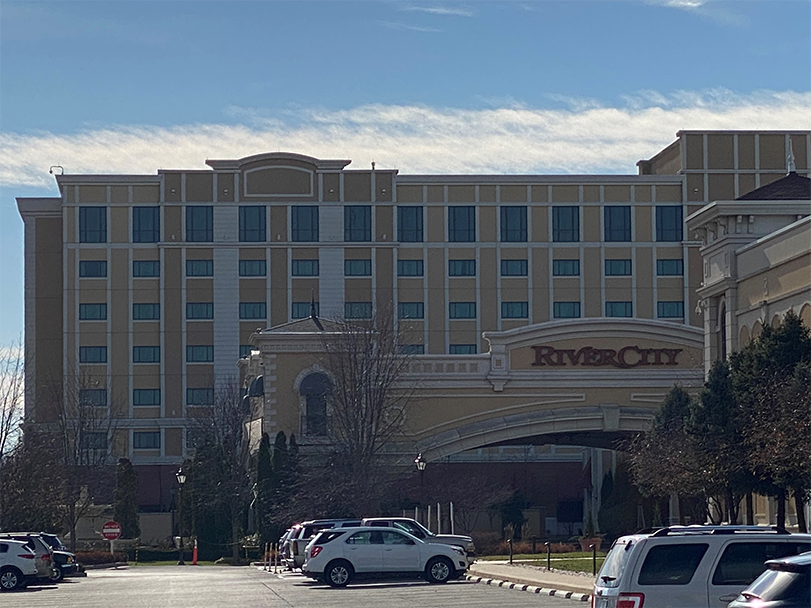 The 80-acre site in Lemay saw heavy industrial activity since the early 1900s. Abandoned for many years, the St. Louis County Economic Development Council and the St. Louis County Port Authority cleaned it up to attract potential developers. Excavating and disposing of tons of contaminated materials and other wastes, and constructing a new thoroughfare, helped render the site eligible for redevelopment into a state-of-the-art gaming and mixed-use complex.

The site is the 80-acre former National Lead (NL Industries) manufacturing facility and the former National Image and Mapping Agency. The site is bordered by River Des Peres to the north; an active railway immediately to the west; the former National Imagery and Mapping Agency, also to the west; vacant land to the south and the Mississippi River to the east. The sites were used for heavy industrial activity since the early 1900s and had been abandoned for many years. In order to clean it up and attract potential developers, the St. Louis County Economic Development Council and the St. Louis County Port Authority entered the entire 80-acre site into the department's Voluntary Cleanup Program in 1998.

The department's Brownfields/ Voluntary and Cleanup Program (BVCP) staff provided oversight of the cleanup. The remedial actions at the property involved the following activities:

A host of innovative cleanup processes were used during this project, including using the site foundations as site-specific fill (once tested and crushed). More than 16,000 tons of contaminated materials were excavated and properly disposed off-site. Over one million tons of materials were imported and used on-site to assist in meeting environmental objectives as a clean cap, remediation excavation backfill and for general redevelopment purposes. A total of 33 55-gallon drums of investigation-derived waste were also properly disposed off-site as non-hazardous, non-regulated waste.

Environmental remediation activities also included building abatement for asbestos and lead-based paint, closure of several tanks and associated structures, remediating affected subsurface soils, remediating affected pond sediments and groundwater monitoring. The ground surface was subsequently covered with clean soil, resulting in contamination at 3-10 feet below ground surface. All sampling and remediation activities used the MRBCA risk-based target levels, in consideration of the end use of the property and site specific conditions. Upon completing the environmental activities, all known areas of environmental concern were addressed and meet remedial objectives. Areas 1, 2 and 3 were combined into one Certificate of Completion and one Environmental Covenant.

Development at the site included building a $375 million state-of-the-art gaming and a mixed-use complex that employs, with benefits, over 1,100 people. The project also included building a new thoroughfare that provides a critical connection between Interstate 55 and the riverfront. The thoroughfare encouraged additional development and job creation and improves public safety.

The new gaming and mixed use complex employs, with benefits, over 1,100 people. The new thoroughfare provides a critical connection between Interstate 55 and the riverfront, improves public safety, combats urban sprawl and encourages additional development and job creation. As part of the Lemay Reinvestment Strategy/ Comprehensive Plan, rental income from the project will be used for enhancing local economic development capacity and funding capital improvement projects, such as child care and housing.

All sampling and remediation activities used the MRBCA risk-based target levels, in consideration of the end use of the property and site specific conditions. All known areas of contamination identified during the historic environmental investigations have been addressed and meet remedial objectives. Areas 1, 2 and 3 were combined into one Environmental Covenant.