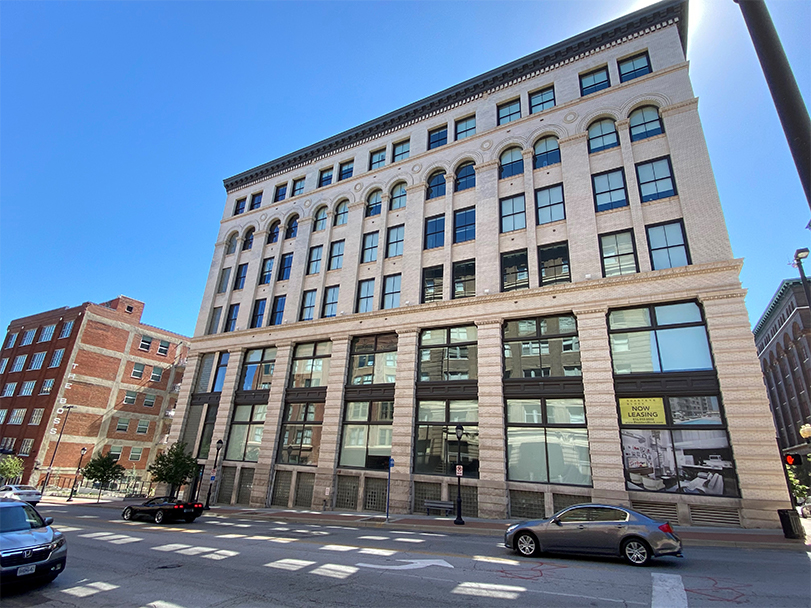 The property was first used in the 1890's for various retail and manufacturing businesses. It was home of the Folgers Coffee Co. for more than seven decades. The meticulously transformed heavy timber, brick and concrete structures on the property are now part of the Roaster’s Block apartment complex. The environmental issues at the site were remediated, with an emphasis on salvage and recycling rather than sending waste to landfills.

The property consists of two tracts of land, commonly addressed as the 600 and 700 block of Broadway St. in Kansas City. The north side of the property was mostly used for auto parking and as a filling station with two underground storage tanks (UST) for gasoline. The filling station closed in 1950. Folgers Coffee Co. obtained the property and continued using it as a parking lot. The southern portion of the property was first used in the 1890's and was occupied by various retail and manufacturing businesses until 1905. The larger 6-story Swofford building on the south side was built in 1899, and is nearly 138,000 square feet. Swofford Brothers Dry Goods Wholesale occupied the heavy timber and brick structure from 1905 to 1939, when Folgers took it over. The smaller 6-story Boss building was built in 1914, and is nearly 80,000 square feet. The concrete and brick structure housed Boss Manufacturing, a garment manufacturing company, before Folgers began production. The Folgers Coffee Co. constructed a connecting 6-story tower and used the remaining space as a small truck loading and maintenance area. In one form or another, coffee production and packaging has been on site for more than seven decades, first in one and then both buildings. For many years, the plant turned out coffee in the familiar red Folgers cans. In later years, the plant switched to packet production, until it shut down in 2012.

In addition to the extensive amount of Folgers plant equipment that had to be removed, the environmental issues at the site were identified as remediating lead-based paint and asbestos in the buildings and soil contamination on a parking lot north of the complex. The department's Brownfields/ Voluntary Cleanup Program (BVCP) staff provided remediation oversight. Multiple environmental samples were collected and analyzed to determine the presence, extent and level of contamination. Contaminant concentrations in soil, groundwater, sub-slab vapor and building materials were then compared to the Missouri Risk-Based Corrective Action standards. Chemical analysis of soil samples showed concentrations of benzo(a)pyrene and arsenic above the Tier 1 Risk-Based Target Levels for non-residential use exposure pathways in type 1 soil. Lead was also present in concentrations that exceeded risk-based target levels for residential use. Groundwater samples showed the presence of naphthalene in concentrations above residential use risk-based target levels. The property was evaluated and it was determined that an engineered barrier (i.e. paved parking lot) and use restrictions would be protective of human health and the environment for its intended use.

Chemical analysis of groundwater samples found Light Non-Aqueous Phase Liquid (LNAPL) in the pool area. Groundwater samples showed the LNAPL thickness ranged between no measurable product and approximately 0.1 feet. Sub-slab soil vapor was collected over four sampling events at several points in both buildings to determine if the LNAPL was impacting the indoor air of either building. Several contaminants were detected in the sub-slab soil vapor samples during each sampling event. However, these concentrations were below the residential \risk-based target levels with an applied attenuation factor of 0.1. Therefore, no restrictions with regard to vapor intrusion are required.

An asbestos survey of the buildings showed the presence of asbestos-containing materials, including silver tar, floor tile and mastic, boiler insulation, fireproofing, pipe insulation, debris, cement panels and window glazing. All identified asbestos-containing materials were removed according to a department-approved Remedial Action Plan (RAP) for asbestos containing-materials and lead-based paint.

Currently the property is operated as the Roaster’s Block, an apartment complex containing 169 rental units that were ready to rent in November 2019. The Roaster’s Block Apartments include a mix of studio, one-, two- and three-bedroom apartments, with rents estimated between $750 and $2,700 a month, depending on unit size and location. The basement of the north building is used for non-residential purposes, such as storage, office, workout area, etc. The south building includes underground parking in both the basement and sub-basement floors. A swimming pool and courtyard were constructed between the buildings.

The $35.9 million project started with demolition, included razing an eight-story coffee bean silo – akin to a grain elevator – that stood in the space between the two buildings. The tower’s removal made way for the patio and pool for tenants. The project was atypical because of the number of holes that were cut in the floors and the roof for the plant equipment. The redevelopment also demanded new heating, air-conditioning, electrical and plumbing, window replacements, weatherproofed roofs and walls, elevator additions and construction of new ramps, garage entries and other exterior doors.

The first order of business was removing 15,000 tons of steel – factory parts and structural steel – left behind when Folgers shuttered the plant. The development team contracted removing the manufacturing equipment and sold the steel, aluminum and copper. They emphasized salvage and recycling rather than sending waste to landfills. An occasional salvaged door or piece of manufacturing equipment was repurposed to decorate the common areas. Solar shades were installed on windows and LED and CFL bulbs were uses throughout the buildings. With a nod toward better air quality, bicycle storage locations were built into the design plans.

Currently, exposure to contaminants in soil is blocked by the parking lot pavement. As long as the parking lot is maintained in its current state, the tract meets the requirements for non-residential use. While the property is currently served by a public water service, there is no law or regulation that prevents the use of groundwater for domestic purposes. Therefore, groundwater use restrictions are required. To limit exposure to lead, all identified components with lead-based paint were either removed or stabilized according to the department-approved RAP. Any stabilized lead-based paint will need to be maintained to prevent deterioration.