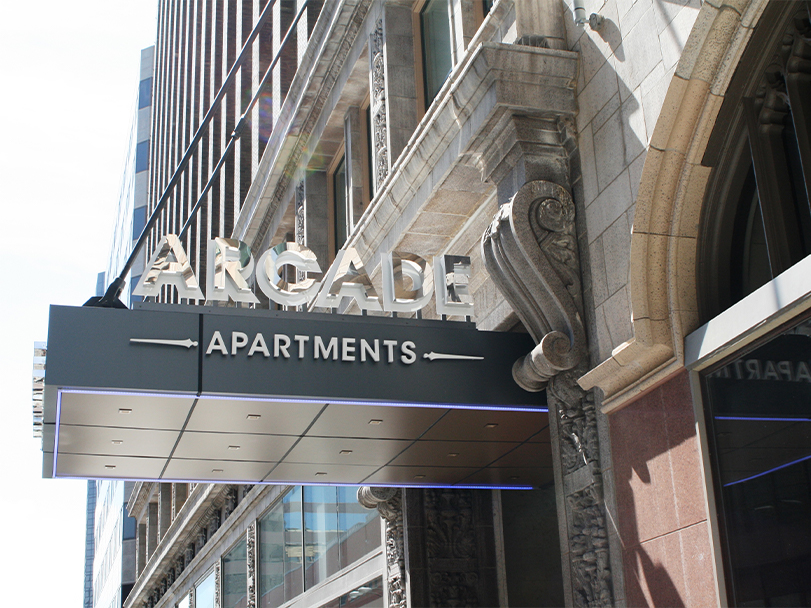 In 1919, the Gothic Revival skyscraper was one of the most prestigious office and retail buildings in St. Louis. While the reinforced concrete frame remained solid, structurally sound and mostly intact, 30 years of abandonment caused substantial damages throughout the structure. The department's Brownfields/ Voluntary Cleanup Program (BVCP) staff provided remediation oversight. One hundred years after it was built, a privately held St. Louis based company transformed the building back to high prestige with the new Arcade Apartments – a place where local artists can both live and work.

When the Arcade Building opened in 1919, the Gothic Revival skyscraper was one of the most sought-after and prestigious office and retail buildings in St. Louis. Over the years, competition, like modern malls, would divert business elsewhere. Towards the end of its active life, the upper floors were deemed unfit for occupancy and subsequently condemned. The building was abandoned in 1978. Through the years, the building deteriorated and was abused by vandals. Windows were broken and the upper floors were left open to the elements. Over 30 years of chronic water leakage caused substantial damage throughout the structure. The Arcade Building's retail spaces required wholesale gutting and the exterior masonry had a vast amount of damaged and decayed bricks. The space as a whole, with its reinforced concrete frame, remained solid, structurally sound and was mostly intact.

The new owners, PARIC - one of the largest privately-held St. Louis based companies, purchased the building in June 2013 for $9.5 million from the city. The $118 million cleanup and redevelopment project includes space leased by Webster University and the new Arcade Apartments. The building’s first two floors and the mezzanine, the former shopping area and the namesake feature of the building, have been filled with administrative offices and classrooms leased by Webster University’s Gateway Campus. Above the second floor, the 282 unit Arcade Apartments was designed to embrace, build and support a sense of community for local artists so that they can both live and work. Two hundred two units were set aside and awarded based on income qualifications and a commitment to an art, including music, sculpting, writing, performance art and more.

Sustainable elements of the new apartment building include:

The lead-based paint in the encapsulated areas will remain in place under an operation and maintenance plan filed in the property's chain of title. Remediation of all contamination was completed in November 2015 and the site was issued a certification of completion letter for unrestricted use.