Vermicomposting is composting with worms, which can compost garbage faster than any other type of composting method. Worms also are very efficient in digesting kitchen food wastes. Each day a worm eats half its weight in food. The care and feeding of worms take far less effort than maintaining an outdoor compost pile. A worm bin is a self contained system. As with any system, several components are involved. This system is composed of a box to contain the worms, the worms themselves, a controlled environment and regular maintenance. Some of the benefits of keeping a worm bin include recycling kitchen food waste, reducing waste disposal costs, producing soil amendments or fertilizer for house and garden plants and having a ready supply of fishing worms. 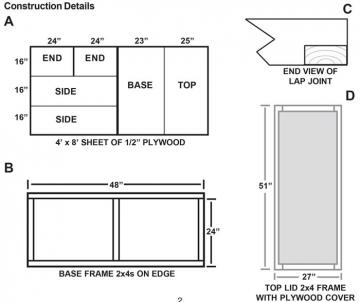 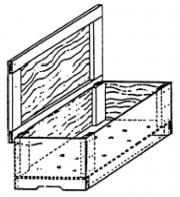 To make the sides, place a 12-inch 2" x 4" under the end of each side panel so the 2" x 4" is flush with the top and side edges of the plywood. Nail the boards into place with 4d nails. Use 16d nails to attach the side pieces to the base frame. Using 4d nails, nail the end plywood to the base and sides. To reinforce the box, place a 16d nail at least every three inches wherever plywood and 2" x 4" meet. Drill twelve 1/2-inch holes through the bottom of the box for drainage.

To assemble the lid, lay two 51-inch and two 27-inch 2" x 4" as shown in figure D. Cut lap joints in the corners (see figure C), then glue and nail the frame together with 16d nails. Center the plywood onto the 2" x 4" frame and nail with 4d nails. Lay the top on the ground with the plywood surface touching the ground. Attach hinges to the top and back. Position hinges so the screws go through the plywood and 2" x 4".

Frequently Asked Questions About The Worms

What kind of worms should be used?

Red worms are the most satisfactory to use in home vermicomposting systems. They process large amounts of organic material in their natural habitats of manure, compost piles or decaying leaves. They reproduce quickly and in confinement. The species of red worm best suited for a worm bin is Eisenia foetida pronounced “I see nee a fet id a.” Eisenia Foetida is known by several common names: red worm, brandling worm, red wiggler, manure worm and fish worm among others. Starter worms of this species for a worm bin may be found in old compost piles (ones that no longer generate any heat) or from local bait suppliers.

What do worms eat?

Any vegetable waste generated during food preparation such as potato peelings, grapefruit and orange rinds, cantaloupe and watermelon rinds, outer leaves of cabbage and lettuce. Plate scrapings, spoiled food from the refrigerator, coffee grounds, tea leaves or egg shells are waste that you may want to feed your worms. Burial of meat is not recommended because decaying meat can produce offensive odors. Mice and rats are more likely to be attracted to worm bins containing meat. Some other things that don’t belong are plastic bags, bottle caps, rubber bands, sponges, aluminum foil and glass.

How much do worms eat?

It is recommended that the worm to garbage ratio be 2:1. Worms are usually sold in terms of “pounds” rather than number. Use one pound of worms (about 1,000) to 1/2 pound of daily garbage. An average family of four generates about seven pounds of compostable garbage per week. To create an environment for the worms to “eat” this much garbage, the worm bin should be equal to one square foot of surface for each pound of garbage per week.

Do worms die in the box?

Worms will die in any home worm bin, but in a properly maintained worm bin, you will rarely see a dead worm.

How long does a worm live?

Most worms probably live and die within the same year. Yet, in culture, Eisenia foetida, the type of worms in this box have been kept as long as four and a half years.