Quartz, a common and abundant mineral, is an important constituent of many different rock types. It appears as individual grains in sandstone; as microscopically fine grains in chert; as small crystals in sedimentary rocks; as lustrous, angular grains in rhyolite; and microscopic, subangular grains in granite. Quartz also is present as distinct crystals lining the hollow, spherical bodies of some geodes. 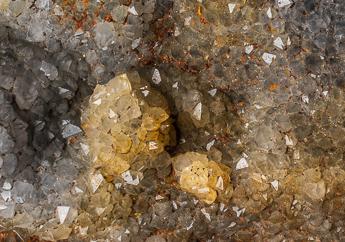 The hardness of quartz (seven on the Mohs scale) makes it harder than most other natural substances. The Mohs scale of mineral hardness is based on the ability of a harder mineral to scratch a softer mineral – talc being soft (1) and a diamond being hard (10). Quartz is usually colorless, transparent or translucent, and is harder than glass or steel.

Ordinary acids do not attack quartz, and it is relatively unaffected by chemical weathering in Missouri. Quartz can be an excellent gemstone. It is hard and generally accepts a brilliant polish. Popular varieties of quartz include: rose quartz, citrine and amethyst. Quartziferous river sand and gravel is used in concrete aggregate and a road material. Quartz forming on other types of rock is known as druse. Quartz occurring as drusy coatings on chert and in large masses is used for rock gardens or as ornamental stone. Pure quartz sandstone is used in the manufacture of glass. Drusy and banded quartz (agate) may be collected in the extensive barite mining area of Washington County, near the towns of Potosi, Mineral Point and Old Mines. Geodes found in extreme northeastern Missouri are almost always lined with quartz crystals.

Visit the department’s Ed Clark Museum of Missouri Geology, where you will find quartz on display.