Myriad visions appear to anyone hearing the word “Ozarks” — mountain folk; rough, hilly country; cool, bubbling springs; clear-flowing streams; float fishing for the wily bass; caves lined with stalactites and stalagmites; and — to rock and mineral collectors, hobbyists and lapidaries — a place to hunt for Mozarkite. The name Mozarkite is a contraction of “Mo” (Missouri), “zark” (Ozarks) and “ite” (meaning rock). 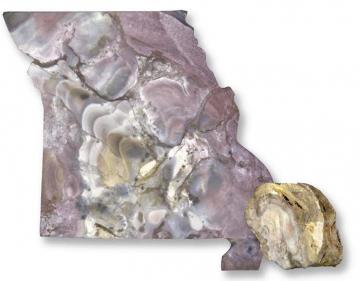 Mozarkite is a form of chert (flint) consisting essentially of silica (SiO2) with varying amounts of chalcedony (milky or grayish quartz). Mozarkite has won distinction as a particular form or variety of chert because of its unique variation of colors and its ability to take a high polish. Typically, the colors are different hues of red, pink and purple with varying tints of green, gray and brown. It is admired by lapidarists throughout the nation. Interest in collecting Mozarkite in Missouri started in the early 1950s, in Benton County.

The majority of occurrences are in west central Missouri, south of the Missouri River and west of the Lake of the Ozarks.

In 1967, the 74th Missouri General Assembly designated the colorful Mozarkite as the official state rock.

Mozarkite is on display in our Ed Clark Museum of Missouri Geology.