This rugged area is characterized by lofty hills, deep valleys, cold clear springs and streams, large caves and a unique cultural tradition. Its name is of obscure origin, possibly a corruption of the French expression, Aux Arkansas meaning “to the Arkansas (Mountains)” and shortened to Aux Arks with subsequent anglicized phonetic spelling of “Ozarks.” Or, it may be a corruption of Aux Arcs, meaning “with bows” referring to an Indian tribe. 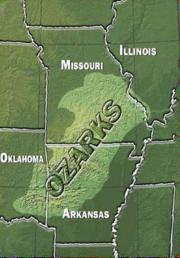 The “top” of the Missouri Ozarks is in the St. Francois Mountains, an area composed of the oldest rocks in the state. The highest elevation is 1,772-foot Taum Sauk Mountain. These peaks were formed by the erosion of igneous rocks that originated as volcanic eruptions and molten intrusions approximately 1.3 to 1.5 billion years ago.

The presently accepted theory of origin for the Ozarks is that during the millions of years when parts of the state were being submerged, up- lifted and re-submerged in warm, shallow seas, the Ozark region was being slowly and continuously uplifted. As the massive land area pushed upward, the rugged topography was sculpted by erosion. What we see today is a landscape changed by the weather of millions of years, including last winter’s blizzard and today’s rainstorm.

The red and gray igneous rock outcrops (mostly granite and rhyolite) of the Ozarks are comparable to knobby rock islands in a weathered sea of sediments.

These sediments consist of layered units of dolomite, limestone, sandstone, shale and chert. Chert (flint) and sandstone are characteristically resistant to weathering, but dolomite and limestone are especially vulnerable to the dissolving action of water. For this reason, much of the Ozarks is like Swiss cheese in that it is tunneled and pitted with sinkholes, caves and spring systems. Missouri boasts more than 5,600 known caves and most are in the Ozark region of the state.

Missouri’s many rivers have cut deep, meandering paths through the Ozarks and are considered by geologists to be classic examples of “entrenched meandering streams.”

It should be noted that the Ozarks are being continuously modified, and that most of the processes described here continue to operate today. Land masses are not ultimately stable; even the most solid rocks are subject to the earth’s movements and the forces of weathering and erosion.

Early settlers were attracted to the Ozarks because game, fish and timber were abundant, and the numerous mineral deposits could be used for a self-sufficient economy.

Raw materials were available to make iron tools, while abundant supplies of lead could be made into bullets. Sulphur and saltpeter could be used to make gunpowder and brick clay. Stone and lime were available for the construction of buildings. Springs of pure water were plentiful as well and bottomland areas with fertile soil made family farming attractive.