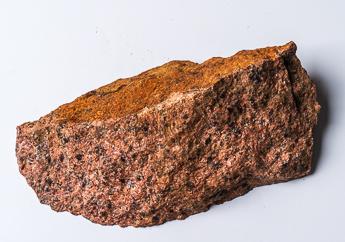 Granite is a general commercial term for decorative building stone that is hard and crystalline. Commercial granite may include granite, gneiss, syenite, monzonite, granodiorite, anorthosite or larvikite or any phaneritic igneous or metamorphic rock. Black granite is a particular kind of commercial granite that when polished, is dark gray to black. It may be a diabase, diorite or gabbro. Geologists consider granite as any holocrystalline, (composed entirely of crystals large enough to see with the naked eye) (Figure 3) quartz-bearing plutonic (cooled slowly in the Earth) igneous, rock. More specifically, granite is a plutonic rock in which quartz constitutes 10 to 50% of the felsic components and in which the alkali feldspar/total feldspar ratio is restricted to the range of 65 to 90%.  According to the IUGS (International Union of Geological Sciences) classification (Figure 2), granite is a plutonic rock containing 20 to 60% quartz and a ratio between feldspars types (plagioclase and K-feldspar) between 10 and 65%. The IUGS classification of granites will be followed in this report.

The Graniteville Granite, also known as “Missouri Red,” along with other granites from Missouri, has been used in monuments and architectural projects across the nation and around the world. In 2010, Missouri produced more than 60,000 short tons of dimension and crushed granite with a value that exceeded $500,000. Crushed granite and monumental dimension stone comprises nearly all of Missouri’s entire granite production. The demand for “Missouri Red” and other monumental granites likely will not decrease. The increasing use of crushed granite for ornamental and road building further secures a promising future for granite production in Missouri.

Missouri granites contain large amounts of the minerals quartz and feldspar. They contain lesser amounts of plagioclase, hornblende, biotite, muscovite, chlorite and epidote. The specific amounts of these minerals vary depending on the particular granite. Many of the granites contain trace amounts of sericite, sphene (titanite) and fluorite. Granite is often found in rounded outcrops created by spheroidal weathering that is best exemplified by the spherical boulders of weathered granite that can be seen at Elephant Rocks State Park (Figure 1). Upon closer inspection, the crystalline nature of these rocks becomes apparent to the observer (Figure 3). The Missouri Geological Survey has traditionally recognized five main types of granites. Included are the Butler Hill, Breadtray, Graniteville, Silvermine and Slabtown granites. These types are based on mineralogy and rock texture. The mineralogy is directly related to the original composition (Table 1) of the magmas that intruded beneath the large ash-flow volcanic centers exposed in southeast Missouri during what geologists call the Mesoproterozoic, 1.4 to 1.1 billion years ago. The Butler Hill, Breadtray and Graniteville granite are quite siliceous (>70% SiO2). The Silvermine and Slabtown granites exhibit slightly less silica than the other types of Missouri granites.

Due to differences in mineralogical composition and differences in cooling rates, the colors and textures of the granites are quite different. The coarsest-grained granites, such as the Graniteville, cooled very slowly allowing some of the feldspar and quartz crystals to grow larger than 1 cm in length. Some of the granite porphyries have large crystals set in a groundmass of small (almost microscopic) crystals. These textures are thought to be created by a crystal-rich magma interacting with colder surrounding country rock. The quick loss of heat resulted in not enough time for larger crystals to grow; hence, many small (microscopic) crystals grew instead.

Missouri granite is currently and primarily used for monumental purposes and road building. Current and historical reported uses include:

Dollar values have not been adjusted for inflation. Granite values are from Granite Value

Missouri has produced granite since the mid-19th century. The first reported significant use of Missouri granite is from a quarry in

Graniteville owned by U.S. Senator B. Gatz Brown. The granite was used for the footings of the Eads Bridge constructed from 1867 to1874 in St. Louis, Missouri. The four granite columns of the Missouri governor’s mansion also came from this quarry. The first extensive quarry operation was opened by Phillip Schneider at Graniteville, Iron County. In 1876, Milne & Gordon opened a quarry at Syenite, St. Francois County. During 1883, Syenite Granite Co. resumed work at Graniteville in the quarry previously operated by Schneider. In 1889, the Sheahan Bros. opened a quarry at Graniteville. The Sheahan family continued to quarry granite from their Graniteville quarries well into the mid twentieth century. See historical granite quarry photos and advertisements.

Visit the department’s Ed Clark Museum of Missouri Geology, where you will find granite on display.