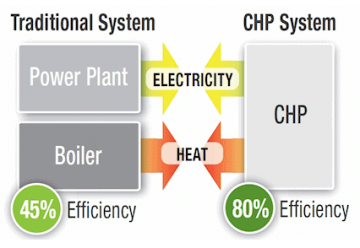 What is combined heat and power (CHP)?

Combined heat and power (CHP), also known as cogeneration, refers to an array of proven technologies that concurrently generate electricity and useful thermal energy from the same conventional or renewable fuel sources. CHP is a form of local or distributed generation as heat and power production take place at or near the point of consumption. CHP generally is more energy efficient than the separate generation of electricity and useful thermal energy. CHP can be used to either replace or supplement conventional heat or power. While the traditional method of producing separate heat and power has a typical combined efficiency of 45%, CHP systems can operate at 80% efficiency or higher.

What are the benefits of CHP?

CHP applications have multiple benefits, including:

What are the different types of CHP processes?

Each CHP application involves the recovery of otherwise wasted thermal energy to produce useful thermal energy or electricity. There are two distinct types of CHP processes: topping cycle and bottoming cycle. In a topping cycle CHP process, the fuel is first used to generate electricity or mechanical energy and a portion of the waste heat from power generation is then used to provide useful thermal energy. In the less common bottoming cycle CHP process, the fuel is first used to produce useful heat for a manufacturing process via combustion or other heat-generating chemical reactions and some portion of the exhaust heat is recovered to generate electricity. Bottoming cycle is sometimes referred to as waste heat to power (WHP). Bottoming-cycle CHP applications are used more in process industries, such as glass and steel, where high temperature furnaces would otherwise release waste heat to the environment.

What kinds of facilities are good candidates for CHP applications?

CHP can be used in a variety of applications that have significant electric and thermal loads. Most CHP applications in the U.S. are found in energy-intensive industrial sectors, such as chemicals, paper, refining, food processing and metals manufacturing. CHP in commercial and institutional applications accounts for about 12% of existing capacity, providing electricity, steam and hot water to hospitals, schools, university campuses, hotels, nursing homes, office buildings and apartment complexes.

What are the primary fuel sources for CHP applications?

CHP systems can be powered by a variety of both fossil and renewable fuels, including natural gas, coal, oil, biogas, landfill gas and various forms of biomass. In recent years, natural gas has been the predominant fuel for CHP systems, while biomass and wastes or byproducts from various industrial processes, agriculture, or commercial activities are expected to gain a larger share with growing environmental and energy security concerns. Some CHP technologies can operate with multiple fuel types, making the system less vulnerable to fuel availability and volatile commodity prices.

What are the major CHP technologies?

CHP systems are categorized based on their prime movers (the heat engines). The prime mover consumes fuels to power a generator to produce electricity or to drive rotating equipment. Prime movers also produce thermal energy that can be captured and used for other on-site processes such as generating steam or hot water, heating air for drying or chilling water for cooling. There are currently five primary, commercially available prime movers: gas turbines, steam turbines, reciprocating engines, microturbines and fuel cells.

Reciprocating internal combustion engines are the most widespread technology for commercial and light industrial CHP applications of less than 5 megawatts (MW). Spark ignition (SI) engines are the most common type of reciprocating engines used for CHP. They generally run on natural gas, though they can also run on propane, landfill gas and biogas.

Microturbines are small, compact, lightweight combustion turbines that typically have power outputs of 30 to 300 kilowatts (kW). A heat exchanger recovers thermal energy from the microturbine exhaust to produce hot water or low-pressure steam. The thermal energy from the heat recovery system can be used for potable water heating, absorption cooling, desiccant dehumidification, space heating, process heating and other building uses. Microturbines can burn a variety of fuels including natural gas and liquid fuels.

Fuel cells are an emerging technology with the potential to serve power and thermal needs with very low emissions and with high electrical efficiency. Fuel cells use an electrochemical or battery-like process to convert the chemical energy of hydrogen into water and electricity. The hydrogen can be obtained from processing natural gas, coal, methanol and other hydrocarbon fuels. As a less mature technology, fuel cells have high capital costs, an immature support infrastructure, and technical risk for early adopters.

For waste heat to power (WHP) applications, the steam Rankine cycle is the most commonly used system which involves using the heat to generate steam in a waste heat boiler. Other organic and inorganic fluids, such as a mixture of water and ammonia, can be used as well to achieve more efficient energy extraction from the heat source.

What are the costs of CHP systems?

The costs of CHP systems can vary significantly depending on technology, system size, location, labor, financial incentives and energy and environmental policies. For instance, a 50 MW gas turbine CHP system (e.g., municipal power plant) might cost more than $50 million while a 1 MW reciprocating engine CHP system (e.g., for a hospital) might have a capital cost of less than $3 million. Generally, with the same fuel and configuration, costs for CHP systems per kilowatt of capacity decrease as size increases.

What should be considered for CHP applications?

Generally speaking, CHP applications are on a case-by-case basis and each system has to be adapted to meet the needs of an individual building or facility. System design is conducted based on the location, size, and energy requirements of the site. CHP is not limited to any specific type of facility but is generally used in operations with sustained heating requirements. Most CHP systems are designed to meet the heat demand of the energy user since this leads to the most efficient systems. Larger facilities generally use customized systems, while smaller-scale applications can use prepackaged units.

What is the current status of CHP applications in Missouri?

Compared to other states, there has been limited development of CHP in Missouri, due in part to lower than average electricity costs. There are approximately 20 CHP projects with a cumulative generation capacity of more than 230 MW for various applications, such as district energy, process heat and building heating and cooling. With system sizes ranging widely from less than 100 kW to over 80 MW, a large majority of these CHP systems use fossil fuels, like natural gas, coal or oil, to power steam turbines and reciprocating engines. The remaining applications predominately use various types of biomass (wood, landfill gas and digester biogas) to achieve additional environmental benefits. As a valuable distributed generation technology and demand side management measure, CHP has been increasingly evaluated by utilities in long-term planning and industrial energy efficiency programs in recent years.

Policies supportive of CHP development could increase applications in Missouri. In its 2011 report on Missouri’s energy efficiency potential, the American Council for an Energy Efficient Economy (ACEEE) concludes that Missouri has significant technical potential for CHP capacity – 3, 600 MW. With incentives that reduce costs by $1,000 per MW installed, an estimated additional 220 MW of CHP would be cost-effective and feasible by 2025, compared to a business-as-usual projection of only an additional 20 MW. A similar report published by the U.S. Department of Energy (DOE) in 2016 indicates approximately half  of the total potential is in the commercial sector, comprising over 5,000 sites that could accommodate CHP capacity of 1 MW or less.

A list of existing CHP systems in Missouri, along with their major specifications, is available at Combined Heat and Power Installation Database developed by ICF International.