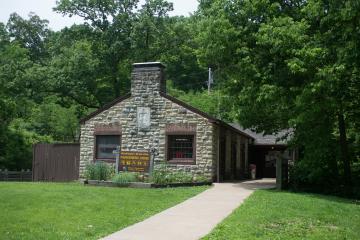 Built in the 1930s by Civilian Conservation Corps African American Company No. 1743, Thunderbird Lodge originally served as a dining hall. Today, it serves as a welcoming center and store for visitors to Washington State Park.

The dining hall was christened Camp Thunderbird after the nearby Native American petroglyphs, and the Thunderbird symbol was incorporated into aspects of the lodge’s construction, including the building’s stone chimney and handmade iron door locking mechanisms.

Three of the four sets of original double doors were fully restored, the wood stripped and refinished, and new glazing installed. Original door hardware, specially crafted for the lodge featuring the Thunderbird motif, was cleaned and refurbished. All four of the door handle sets, featuring a woman and man interlocking arms, had significant damage and were missing parts. Utilizing the original set of drawings, these handles were duplicated with iron materials. Custom storm doors, inspired by historic photos, were created to replace 1980s additions. The heavy timber doorframes were shored with new wood using Dutchman repairs to match the original. Historically appropriate replica windows were made; the original hardware was salvaged, refurbished and reinstalled. Another 1980s renovation covered the fireplace in stacked stone and stucco; new Missouri quarried stone, similar in color and appearance to the exterior, was installed maintaining the size and dimension of the original.

A new hardwood mantel was created to match similar mantels around the park. New wood wainscoting was installed to replace the existing water damaged ones; a second bathroom was added, and both received updated finishes and fixtures. Ceramic tile flooring was installed throughout to withstand potential future flooding. A new wood shake roof, matching the original in dimensions and reveals, was installed, along with new gutters and downspouts. Stonework was cleaned and mortar joints were repointed, and special attention was given to cleaning the hand-carved Thunderbird motif at the entrance.

The successful restoration of Thunderbird Lodge ensures it will remain to educate future visitors about the park’s history while also providing Washington State Park with a modern space that is functional for its current needs.

Washington State Park is located south of St. Louis, 10 miles south of De Soto on State Highway 21. For more information about the award, contact the park office at 636-586-5768.

For more information on state parks and historic sites, visit mostateparks.com. Missouri State Parks is a division of the Missouri Department of Natural Resources.