JEFFERSON CITY, MO, FEB. 18, 2022 -  Danny Counts, assistant superintendent of Trail of Tears State Park with the Missouri Department of Natural Resources’ Division of Missouri State Parks, has been selected as the February 2022 State of Missouri and department Team Member of the Month. Counts was selected for his dedication to Missouri State Parks and his recent work identifying an issue with a campground host’s RV battery. 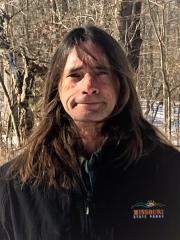 A campground host identified a strange smell around their campsite and alerted Counts of the issue. He quickly set out to track down the source of the smell. Initially, he suspected the odor was related to a potential sewer system issue, so he inspected the sewer system in the area as well as the host’s RV for potential leaks or other problems.

Because of his diligent problem solving and willingness to troubleshoot until a solution was found, Counts was able to prevent a potential fire and associated hazards that could have resulted in property damage to the campground host’s RV, as well park amenities and neighboring RVs, or injury to park guests.

“Danny always puts safety at the forefront, no matter what it is related to - staff safety, park safety, visitor safety, water and wastewater safety,” said Denise Dowling, superintendent at Trail of Tears State Park and Counts’ supervisor, who nominated him for the award. “Danny spent several hours racking his brain to troubleshoot the problem and kept going at it from different angles until it was solved.”

Counts joined the Missouri Department of Natural Resources in July 2012 and resides in Cape Girardeau.