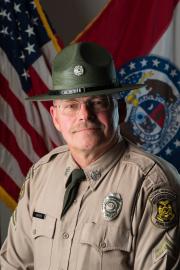 JEFFERSON CITY, MO, JULY 25, 2022 - Corporal Steve Jabben, a park ranger with the Missouri  Department of Natural Resources’ Division of Missouri State Parks, has been selected as the State of Missouri and department Team Member of the Month for July 2022. Jabben was selected for his service to the department and for his lifesaving efforts during two incidents at Roaring River State Park.

In November 2021, Jabben responded to an attempted suicide near the park. After being informed about the situation, he quickly organized a search of the area. His detailed knowledge of Roaring River State Park, as well as the neighboring Mark Twain National Forest, allowed searchers to quickly locate the subject along a remote road.

Once he confirmed the subject was alive but unresponsive, Jabben immediately initiated lifesaving measures that brought the individual back to consciousness, then handed treatment over to emergency medical personnel who had arrived on-site. The subject was transferred to a hospital where they made a full recovery.

Additionally, in May 2022, Jabben responded to an unresponsive park guest on Devil’s Kitchen Trail. After assessing the situation, he deployed his automated external defibrillator and began performing cardiopulmonary resuscitation (CPR). He continued CPR for 12 minutes until responders from Eagle Rock Fire Service arrived to take over lifesaving measures and arrange for emergency air transportation to a local hospital. The subject recovered.

“Cpl. Jabben, along with the responding park team, law enforcement, fire crews and paramedics, likely saved these people’s lives.” said Sgt. Geoffrey Evans, Jabben’s supervisor, who nominated him for the award. “While these types of responses are expected as part of the duties of a Missouri State Park Ranger, in these instances he performed to the highest standards.”

Jabben joined the Missouri Department of Natural Resources in March 2014 and resides in Cassville.